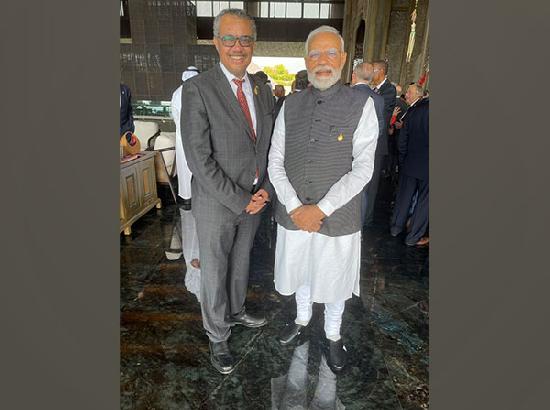 Ghebreyesus expressed gratitude to PM Modi for collaborating with WHO on building the global traditional health centre.

Sharing a picture of his meeting with PM Modi on Twitter, WHO Chief Tedros Adhanom Ghebreyesus said, “Thank you #India Prime Minister @narendramodi for your collaboration with @WHO on hosting and building the global traditional health centre. Together for #HealthForAll!”

Earlier in March, the World Health Organization (WHO) and the Indian government signed an agreement to establish the WHO Global Centre for Traditional Medicine.

Supported by India’s investment of USD 250 million, the global knowledge center for traditional medicine aims to highlight the benefits of traditional medicine from across the world through modern science and technology to improve the health of people, according to the statement released by WHO.

On April 19, PM Modi laid the foundation stone of the WHO Global Centre for Traditional Medicine (GCTM) in Jamnagar, Gujarat. The ceremony was attended by Mauritius Prime Minister Pravind Kumar Jugnauth and WHO Director-General Tedros Adhanom Ghebreyesus.

The 17th edition of the G20 Summit will focus on key issues of global concern under the theme of ‘Recover Together, Recover Stronger.’

He met US President Joe Biden before heading into the day’s engagements. PM Modi had a “fruitful discussion” with WorldBank President, David Malpass in Bali, Prime Minister’s office said in a tweet.

While addressing the G20 working session on Food and Energy Security, PM Modi said, “India’s energy security is also important for global growth, as it is the world’s fastest-growing economy. We must not promote any restrictions on the supply of energy and stability in the energy market should be ensured. India is committed to clean energy and the environment.”