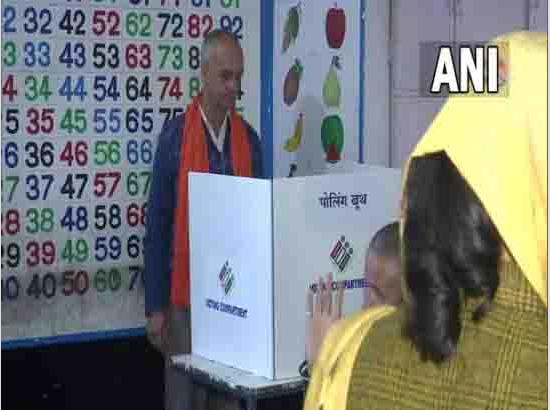 Polling for 68 Assembly seats in Himachal Pradesh began at 8 am amid tight security arrangements on Saturday. A total of 55,92,828 electors who will cast their votes till 5 pm today will decide the fate of 412 candidates who are in the fray. Out of the total number of electorates, 27,37,845 are women, 28,54,945 men and 38 were third-gender. This time, the representation of woman candidates is 24.

The high-voltage campaigning by political parties had ended on November 10, following which it’s up to the electorate of Himachal Pradesh to decide the political fate of the candidates today.

The fight is in between the ruling BJP in the state which is looking to retain power ditching the trend of the alternate party coming to power every five years since 1982, and Congress which is banking on its ’10 guarantees’ that the party listed out in its manifesto to take them home. Aam Aadmi Party is in line looking to leave a mark in the state and thus contesting on all the 68 seats alone.

In Mandi, the battle is between BJP candidate Anil Sharma and Congress’ Champa Thakur. AAP fielded Shyam Lal in the seat. The Shimla Urban is among the most talked about seats this time as BJP gave a ticket to Sanjay Sood, who runs a tea shop in the city. Meanwhile, 67 companies of Central Armed Police Forces (CAPF) comprising 6,700 personnel and 15 Central Reserve Police Force (CRPF) companies have been deployed for holding free and fair Assembly polls in Himachal Pradesh.

In 2017, BJP swept the Himachal polls, bagging 44 of the total 68 seats while Congress managed to get just 21 seats.