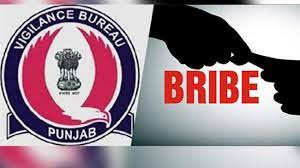 The Punjab Vigilance Bureau (VB) during its ongoing campaign against corruption on Wednesday arrested a revenue Patwari for taking bribe of Rs 3,500 and registered a bribery case against an Assistant Sub Inspector (ASI) of Police for demanding and accepting bribe Rs 30,000.

Disclosing this here today, an official spokesperson of the VB said Patwari Bhagwan Das was arrested on the basis of complaint lodged at Punjab Chief Minister’s anti-corruption online complaint number by the complainant Balwinder Singh resident of village Ballran, Sangrur district. He has alleged that the above said Patwari has demanded and accepted a bribe of Rs 3,500 to mutation of his agricultural land.

He informed that after verification of the facts and the material evidence, it has come to light that the accused revenue official has received this bribe amount. In this regard a case under section 7 of Prevention of Corruption Act has been registered against the accused at VB police station, Patiala and further investigation is under progress.

In another bribery case the VB has registered a corruption case against ASI Gurmeet Singh posted at police station sadar, Ferozepur for demanding and accepting bribe Rs 30,000. In this case complainant Jagsir Singh of village Korey Wala Kalan, Moga district has approached the VB and alleged that the above-mentioned police official has taken Rs 30,000 in lieu of not to involve him in a police case as a woman has submitted a complaint against him.

The spokesperson informed that the complainant has further alleged that the ASI Jagsir Singh, being an investigation officer in this case, has demanded Rs 20,000 more as a bribe for executing mutual agreement in this case. He has recorded the conversation as evidence for demanding the bribe by the police official.

After verification of the complaint and the material evidence, the VB has registered a case under Prevention of Corruption Act against the accused ASI at VB police station, Ferozepur and further investigation is under progress.