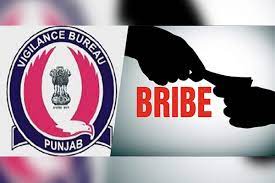 Disclosing this here today, a spokesperson of the Vigilance Bureau (VB) informed that the above said accused Davinder Kumar has been arrested on the complaint of complainant Tajinder Singh of village Bercha, district Hoshiarpur, who has been employed as Manager in Cooperative Society Tanda, Hoshiarpur. The accused has been supervising 70 Cooperative Societies in block Dasuha including the above said at Tanda,

The complainant further informed to the VB that the said accused Devinder Kumar, did not allowed him to join on duty but opened another investigation against him regarding recovery of funds.

The complainant further informed that the above said accused Davinder Kumar had already taken Rs 5,000 as a bribe from him and demanding Rs 50,000 more in lieu of favouring him in the present case.

After probing the allegations submitted by the complainant, the VB has arrested the accused for accepting a bribe of Rs. 20,000 from the complainant in the presence of two official witnesses. In this regard, FIR No. 20 dated 10-10-2022 under Section 7 Prevention of Corruption Act has been registered against the accused at VB police station Jalandhar. Further investigation in this case is under progress.