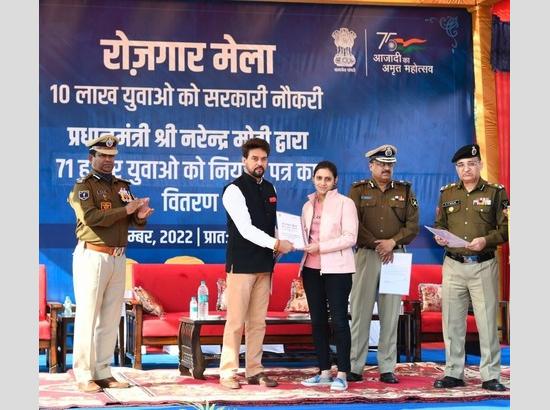 As part of the Prime Minister’s commitment to accord highest priority towards employment generation, Rozgar Melas were organized at 45 locations across the country on Tuesday. On this occasion, the Prime Minister distributed Offer of Appointment (OOA) to 71,000 newly inducted recruits through Video Conferencing.

Union Minister for Sports and Information & Broadcasting Anurag Singh Thakur personally handed over the appointment letters to recruits in Gurugram. He congratulated the new appointees and urged them to give their best as this job would not only propel them individually but shall also help India reach its potential. “India is at the cusp of exponential growth and this is an opportunity for the new appointees to contribute in taking the nation forward and higher”, he said.

Addressing the gathering virtually, Prime Minister Narendra Modi said that more than 71,000 youth are being given appointment letters in more than 45 cities in India which will result in a new era of happiness for so many families. He recalled that on the day of Dhanteras, the central government had distributed 75,000 appointment letters to the youth. “The Rozgar Mela of today is proof that the central government is working in mission mode to provide employment opportunities to the youth of the country”, the Prime Minister said.

Prime Minister Modi also said that several Union Territories and states will keep on organising such Rozgar Melas from time to time. He expressed delight that thousands of youth had also been provided appointment letters in Maharashtra, Gujarat, Uttar Pradesh, Jammu & Kashmir, Ladakh, Andaman and Nicobar, Lakshadweep, Daman and Diu, Dadra and Nagar Haveli and Chandigarh by the respective governments.

On this occasion, Anurag Thakur while addressing the people present at the job fair said, “Today 266 youths are getting government jobs in this fair. Not only this, more than 2000 jobs are being provided through BSF all over the country. This shows that BSF is encouraging the youth to serve the country.”

Anurag Thakur in his speech encouraged the youth and said, “The most important day for a youth is when he starts a job in his life. I can see happiness and brightness in all your eyes. The Prime Minister had organized an employment fair last month and handed over appointment letters to 75,000 youth under the promise of providing employment to the Prime Minister. Today 71 thousand more Indian youths are getting employment. Many congratulations and best wishes to all.”

This event is the second in the series (the first one was held on 22nd October 2022 at 50 locations) and more are expected to be held at different locations in the future.