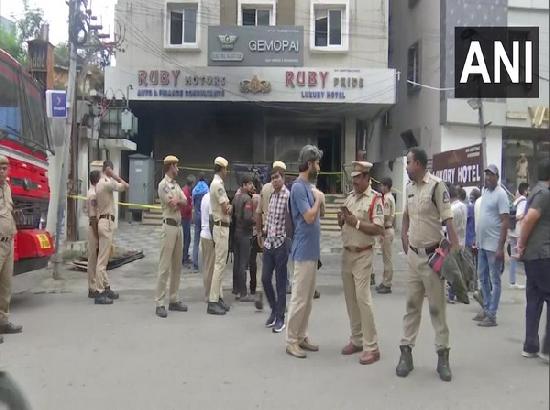 The death toll in the fire incident at Hotel Secunderabad has risen to eight, police said on Tuesday.

“The fire broke out last night around 9.30 pm. The fire started in the basement, where a lot of electric bikes were parked. We do not know the origin of the fire as yet. Eight people have died and some are hospitalized. A case has been registered,” said Chandana Deepti, Deputy Commissioner of Police, North Zone, Hyderabad.

At least eight people died and several were injured when a fire broke out at a hotel in Secunderabad late on Monday night.

The fire broke out at the charging unit of the electric scooter showroom on the ground floor of the hotel building. Following this, people on the upper floors got trapped in smoke.

Several fire tenders rushed to the spot to bring the fire under control. Police reached the spot and evacuated people.

“The fire broke out in the electric scooter charging unit on the ground floor. Smoke overpowered the people staying on the first and second floors. The remaining people jumped from the building and were rescued by locals. They were rushed to the hospital. Fire tenders on the spot,” said Hyderabad Commissioner CV Anand.

“Very unfortunate incident. Fire brigade teams tried their best to rescue people from the lodge but due to heavy smoke, some people died. Some people were rescued from the lodge. We are probing how the incident happened,” the minister said.

Prime Minister Narendra Modi expressed his condolences on the tragic death of six people who died when a fire broke out at a hotel in Telangana’s Secunderabad late on Monday night.

“Saddened by the loss of lives due to a fire in Secunderabad, Telangana. Condolences to the bereaved families. May the injured recover soon,” Modi tweeted.

While expressing his condolences through a Twitter post, Modi said Rs 2 lakh from PMNRF (Prime Minister’s National Relief Fund) would be paid to the next of kin of each deceased and Rs 50,000 each to the injured.