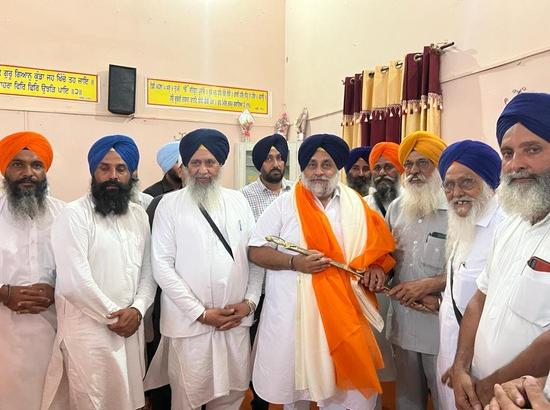 Shiromani Akali Dal (SAD) president Sukhbir Singh Badal today asked chief minister Bhagwant Mann to dump the Delhi Model based on fake publicity and run the education and health sectors as per needs of people of Punjab. He asserted the Delhi Model of school education was a complete failure like everything else in Delhi which was bolstered by propaganda and paid news.

Talking to newsmen here after attending a number of public functions besides visiting the residences of senior Akalis, the SAD president said it was ironic that chief minister Bhagwant Mann continued to swear by the Delhi Model of school education even though the quality of school education in Punjab was ranked better than Delhi in repeated national surveys. He said the latest Foundation Learning Study, 2022 report had revealed that class three students of Punjab schools had a higher percentage of basic knowledge and skills when compared to their counterparts in Delhi. “Earlier two repeated surveys including the National Achievement Survey and the Performance Grading Index survey had also ranked Punjab schools above those in Delhi. The chief minister should stop championing the Delhi school education system immediately”, he added.

Asserting that the Delhi Model was costing the State dearly, Sukhbir Badal said “the Punjab finance minister has recently disclosed that the State revenue had registered a 47 per cent increase in excise and 24 per cent increase in GST collections during the last five months but the government had been unable to pay its monthly salary in time. It even invoked RBI guarantees for the first time in the history of the State to pay salaries to employees”.

Saying all this was happening because the AAP high command was behaving like the East India Company; Badal said “the revenue of Punjab is being looted to fund elections in Himachal Pradesh and Gujarat. Nearly Rs 100 crore has been spent on advertisements and paid news across the country, particularly in election bound States. As much as Rs 700 crore has been earmarked for publicity in the State budget for the current financial year. This is why development is not taking place and funds are not available to even pay salaries”.

Badal said the chief minister used to say that his government would remain in the villages. “Forget villages, the government is not present in Chandigarh also”. He said in villages people were not getting the benefits of social welfare measures like the Aata-Daal scheme, Shagun scheme and Old Age pension scheme.

Answering a question about the chief minister’s mother and wife assuming constitutional roles, Mr Badal said “this is wrong. Constitutional positions should be respected and nobody can usurp them. If this continues to happen there will be complete chaos in the State”.

He also assured Punjabis that the SAD would not allow AAP and its Convener Arvind Kejriwal to rob the State of its river waters. “We will never allow the AAP conspiracy to hand over our river waters to Haryana to succeed and are ready to make any sacrifice to defeat it”, he added.