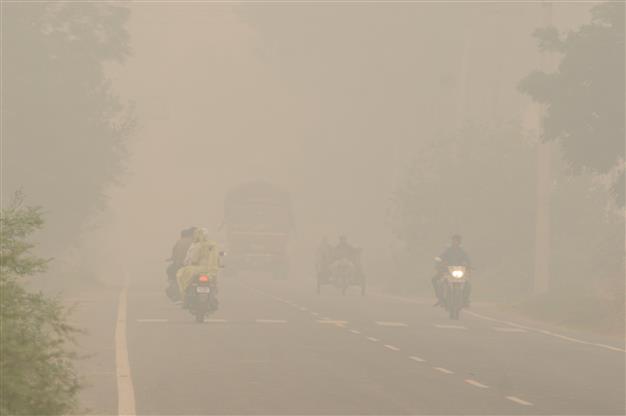 The air quality in various districts of the state, particularly in North Haryana, deteriorated and turned to ‘severe’ category as smog engulfed most parts of the state. The situation was also worrisome as visibility was poor on roads due to smog.

The data collected from the Haryana State Pollution Control Board (HSPCB) on Friday till 4 pm shows a grim picture of the state.

According to the air quality reports by the Central Pollution Control Board (CPCB), Kurukshetra and Ambala districts were in the severe category with 449 and 447 AQI, respectively. Kaithal (391), Yamunanagar (371), Karnal (337), Panchkula (330), Panipat (320), and Fatehabad (306) were in the very poor category, the data said.

Meanwhile, the state has recorded 69 fresh cases of farm fires, taking the total number to 2,693 in the state so far. However, the number this year is very less in comparison to the corresponding duration last year as the state had reported 4,753 cases.

The air quality in Kurukshetra and Ambala turned severe with the air quality index (AQI) recording an average particulate matter (PM) 2.5 at 449 and 447, respectively, on Wednesday evening.

The severe air quality seriously impacts those with existing diseases and respiratory illness, besides affecting healthy people too.Dr Naresh Bhardwaj, member of Green Earth, NGO, said, “A thick blanket of smog has enveloped the region. Only the stubble burning can’t be blamed and residents are equally responsible for the situation as garbage is being burnt on a regular basis at different locations..” Ambala Civil Surgeon Dr Kuldeep Singh said, “An increase in the number of patients with asthma, chronic obstructive pulmonary disease (COPD) and other respiratory issues in the OPDs is being witnessed. Even from the CHCs and PHCs many patients are being referred to civil hospitals. The people who have any kind of breathing issue should avoid outings, should take extra precaution, and use masks as the current air quality can cause them trouble.

”Nitin Mehta, Regional Officer from the Haryana State Pollution Control Board, said, “Climatic conditions are the main reason behind the current situation. Directions have been issued to the civic bodies to sprinkle water on roads and trees, and it will bring respite to residents.”