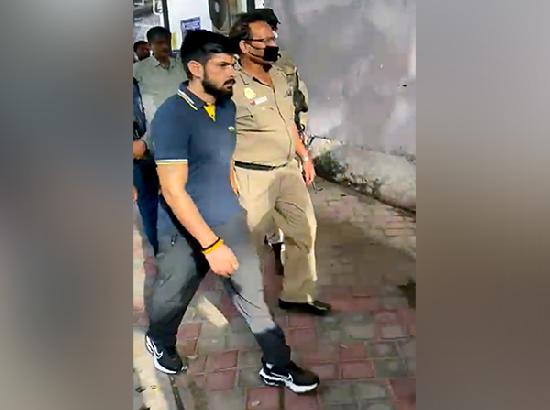 The agency is probing the angle of links of Delhi-NCR’s gangsters with terror outfits. Special Judge (MCOCA) Shailendra Malik of Patiala House Court granted 10-day custody to NIA after hearing the submissions made by the agency. NIA sought 12 days of custody of Lawrence Bishnoi.

During the hearing, the agency submitted before the court that it was investigating Sidhu Moose Wala’s case and need his custody.
The court asked the agency, “What is the locus of NIA in the Moose Wala murder case?”

The agency replied that the material is coming from Pakistan and people like Moose Wala are targets. An investigation into the larger aspect is being carried out, and links are being searched.

Earlier the court had issued notice to Lawrence Bishnoi and three other accused in a plea seeking permission to obtain voice samples of them. Delhi Police had moved this application.

Delhi Police had said that Lawrence Bishnoi was using a mobile number which was being used by a member of Indian Mujahideen. The calls made by Bishnoi and his gang members were intercepted.
Delhi Police has sought permission for obtaining the voice sampling of accused Lawrence Bishnoi, Sampat Nehra, Bintu alias Mintu and Deepak alias Teenu to ascertain their voice in intercepted calls.
The plea had submitted that on the basis of secret inputs it was revealed that one mobile number was being used in Tihar Jail by members of Indian Mujahideen terrorist group.

However, during surveillance, it was revealed that the phone number was also being used by accused Lawrence Bishnoi who was also lodged in Jail Number 8, Tihar Jail where the members of Indian Mujahideen were lodged, Delhi Police said.

Delhi Police had also said the transcripts of such calls were also attached with a charge sheet. The police also submitted the application.

The charge sheets against these accused persons have been filed under MCOCA before the court.