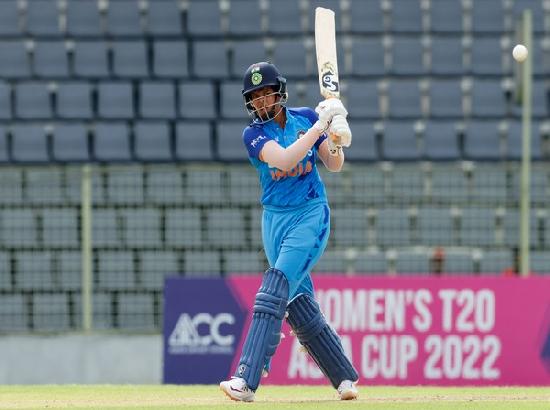 The All-India Women’s Selection Committee has picked India U19 Women’s squad for the upcoming bilateral away T20 series against South Africa U19 and the ICC U19 Women’s World Cup to follow.

The maiden edition of the ICC U19 Women’s T20 World Cup featuring 16 teams will take place in South Africa from January 14 to 29, 2023. India’s Under-19 team will play five T20s against South Africa from December 27 to January 4 in Pretoria.

The senior women’s team’s 19-year-old wicketkeeper Richa Ghosh, who has played 25 T20Is and 17 ODIs, was also selected for the 15-member squad.

India is placed in Group D alongside South Africa, UAE and Scotland. The top three teams from each group will progress to the Super Six round, where teams will be pooled into two groups of six.

The top two teams from each group will then progress to the semi-finals, which will be played on January 27 at JB Marks Oval in Potchefstroom. The final will take place at the same venue on January 29.

Placed in Group D India will take on Scotland, South Africa and the United Arab Emirates (UAE) in the group stage.

India will face South Africa in their opening match of the tournament on January 14. The Women in Blue will next lock horns with UAE on January 16 and Scotland on January 18.

The historical event will showcase the future stars of the game with 16 teams travelling to South Africa to compete in 41 matches from January 14 to 29, 2023 in Benoni and Potchefstroom.