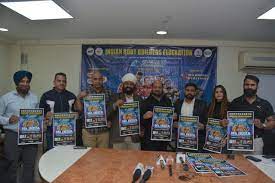 Punjabi Amateur Body Building Association(PABBA), under the aegis of the Indian Body Builders Federation, announced the dates of the most sought-after event in the bodybuilding arena, the National level ‘Senior Mr. India Body Building Championship.’

The event which is scheduled to take place at Ambedkar Bhawan in Ludhiana from December 23 to 25 2022, will witness more than 700 players and 250+ officials competing against each other in various categories to clinch the top positions in the tournament.

“Selection rounds have been done in some states and are already being organized across the remaining states in the country. The finals will be held in Ludhiana which will see participants from all across the country. The association seeks maximum participation from the youngsters in Punjab and Tricity, this is why the press conference was held here,” said Maneet Singh, President, Punjabi Amateur Bodybuilding Association. Maneet belongs to tricity and so wants maximum participation from tricity.

While giving details of the event Monu Sabharwal, General Secretary, of Punjabi Amateur Bodybuilding Association, said, “The national event will have 16 awards in total which have been divided into various categories that include 10 top positions in Body Building, 2 in Man Physique, 2 in Classic Bodybuilding and 2 in Fitness Physique.”

The competitors from various states, including professionals from the Income Tax department, Police Services, Indian Railways and others will participate in the Body Building championship to clinch the title for the14th Senior Mr. India body building Champion in 55 to 100+ weight categories.

In addition to the enthusiasm & the sportsman spirit that the players display in the tournament, the cash prizes for the winners are a cherry on the cake for them. Also, the tournament is a stage that gives wings to the players to secure good jobs in the government sector on the basis of good rankings in the national event.