SAD not to allow an inch of Chandigarh to be transferred to Haryana: Chandumajra 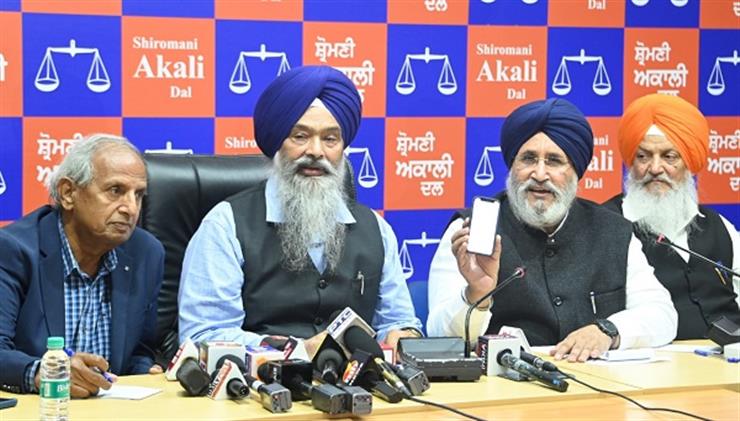 The Shiromani Akali Dal (SAD) on Thursday accused the Aam Admi Party govt in Punjab of hobnobbing with the center and the Haryana governments to dilute and weaken Punjab’s legitimate and constitutionally acknowledged claim on its capital, Chandigarh.

Firmly opposing the center’s reported move for transferring or swapping a piece of land in the City with Haryana for allowing the latter to construct its Legislature here, the party said, “Not an inch of land from Chandigarh would be allowed to be transferred to or swapped with Haryana as the entire Capital belongs inalienably to Punjab. This has been acknowledged by both houses of the Parliament as well as by successive governments at the center.

Even Haryana is committed through the Punjab Accord to the transfer of the City to Punjab.”

This was stated by senior Akali leader Prof Prem Singh Chandumajra at a press conference at the party headquarters here this evening.

Senior Akali leaders Dr Daljeet Singh Cheema, Hira Singh Gabria and Harcharan Singh Bains were also present at the press conference held after a meeting of the senior party leaders which was presided over by the party president Sukhbir Badal.

In this meeting a major decision was taken that a high-level delegation of the party led by Party president Sukhbir Singh Badal will meet the governor of Punjab to appeal to him to reject the demand put forward by Haryana govt for allotment of 10 acres of land for the construction of Haryana Vidhansabha building in Chandigarh.

Prof Chandumajra appealed to “all right-thinking people and political parties committed to safeguarding interests of Punjab to “come together on a single platform for a united fight counter and defeat the center’s onslaught against the state.” He said that the SAD will leave no stone unturned, including resort to peaceful mass movement and legal alternatives, to safeguard the state’s vital interests

Expressing grave concern over the progressively worsening “law and order situation in the state,” Prof Chandumajra came down heavily against the AAP government and Chief Minister Bhagwant Mann, saying, “A fear psychosis prevails in Punjab with people living in utter panic of gangsters, killers and looters. Punjab today is a headless state, with a government in absentia. With daily broad daylight murders, lootings and other acts of violence becoming the new norm here, the entire AAP government and CM are “dancing away to glory in Gujarat. There is no safety and security of life and property and the government is functioning either as an accomplice of the lawless elements or a helpless bystander. There have been countless high-profile murders in addition to the utter collapse of general law and order in the state. Punjab was a peaceful state under S Parkash Singh Badal lead government but today Peace here lies in shambles,” said Chandumajra,

The Akali leader also blasted the government move on usurping the “poor farmers lands in the Mushtarka Maalkan and other such categories. He said that although the HC had stayed the government’s orders in this regard, the ministers concerned and other responsible office bearers of AAP continue to harp on usurping these lands. He said the SAD would stand by the farmers against this “encroachment drive by the government,” The govt is undoing the legacy of Banda Singh Bahadur ji who had empowered the poor peasants by bestowing these lands on them.”

Prof Chandumajra also condemned the “ derogatory remarks of the Chief Minister against prominent farm leader …..Dallewal and others. He said that the CM should immediately close the issue by offering apology to the farm leaders.

The Akali leader also took the government to task for letting down the Scheduled castes and other sections of the poor. “The AAP government has stopped all welfare schemes and is running away from its commitments made to the poor and common people, including Rs 1000 to every Punjabi adult female.”