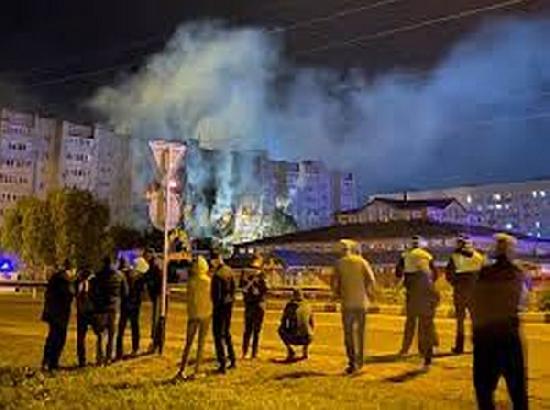 At least 13 people have been killed, including three children in a military plane crash that took place in a residential area of the southwestern Russian town of Yeysk, near Ukraine on Monday, Russian state media reported.

Ten bodies were found after the removal of debris at the incident site got completed.

“Rescuers have completed clearing the debris. Ten bodies were found during rescue activities, which brings the total number of deaths to 13 people, including three children. Nineteen people were injured in the emergency situation,” TASS reported quoting the Emergencies ministry’s representative as saying.

Around 360 people were evacuated and 68 people were saved after the rescue operation concluded.

A Russian Su-34 supersonic fighter-bomber jet crashed into a residential building in the city of Yeysk on Monday. The crash was due to the ignition of one of the engines, Russian state media RIA Novosti reported citing the country’s defense ministry.

“On October 17, 2022, a Su-34 aircraft crashed while climbing to perform a training flight from the military airfield of the Southern Military District,” the ministry said in a statement to RIA.

“According to the report of the ejected pilots, the cause of the plane crash was the ignition of one of the engines during take-off. At the site of the crash of the Su-34 in the courtyard of one of the residential quarters, the plane’s fuel ignited.”

Yeysk is located across the water from the Russian-occupied city of Mariupol.

Earlier, at least four people were killed after Russia attacked the capital of Kyiv with Iranian-made “kamikaze” drones on Monday, according to Ukrainian officials, who repeated their calls for Western allies to supply Ukraine with more advanced air defense systems.

Drones have played a significant role in the conflict since Russia launched its full-scale invasion, but their use has increased after Moscow acquired new drones from Iran over the summer. Iran on Monday once again denied supplying weapons to Russia in its war on Ukraine.