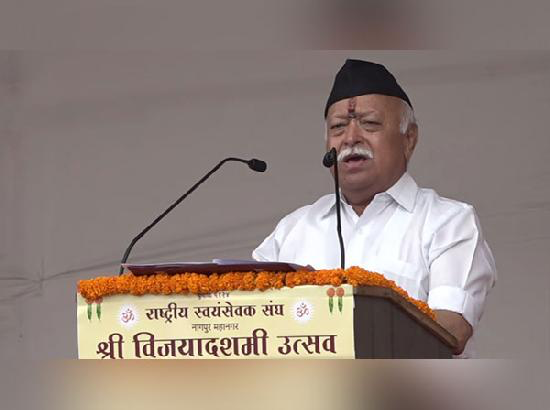 Marking a change in its tradition, the Rashtriya Swayamsevak Sangh invited a woman for the first time in its history in the form of mountaineer Santosh Yadav as the chief guest at the annual RSS Vijayadashmi festival on Wednesday.

The festival was inaugurated by RSS chief Mohan Bhagwat who also performed the ‘weapon worship’ (shastra puja) on the occasion.

Santosh Yadav has been a mountaineer who created a world record by becoming the first woman in the world to scale Mount Everest twice.

Addressing the occasion, Bhagwat called for a “comprehensive policy on population” and said that it should be applied equally to all.

“It is true that the higher the population, the greater the burden. If the population is used properly, it becomes a resource. We also have to consider how many people our country can feed and support after 50 years. Population imbalance leads to changes in geographical

“Considering a woman as the mother is good, but restricting them to closed doors is not good. There is a need to give equal rights to women to take decisions everywhere. All the work that the mother power can do that man cannot do, they have so much power. And therefore it is important to enlighten, and empower them and give them the freedom to work and give equal participation in the work in this way,” he said.

“Power is the foundation of peace. The presence of a woman chief guest has been discussed a long time,” the RSS chief added.

Bhagwat said that the government’s policies are leading the country towards self-reliance.

“The government is pursuing policies which lead towards self-reliance. Bharat’s importance and stature has increased in the community of nations. In the sphere of security, we are becoming more and more become self-sufficient. Our economy is getting back to the pre-pandemic levels, which is expected to rise further. The sportspersons are also bringing laurels to the country,” he said.

Talking about the importance of mother tongue in education, Bhagwat said that English as a language is “not necessary for a career”.