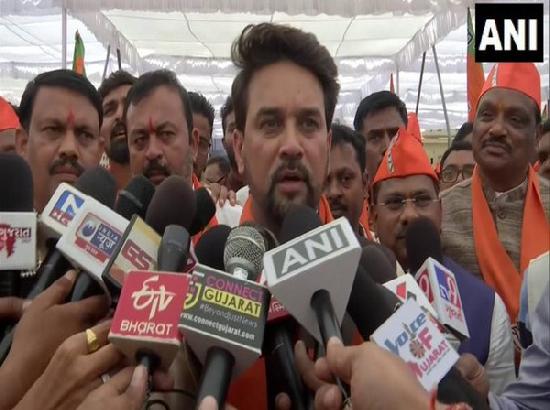 Rahul Gandhi on Thursday, during Bharat Jodo yatra, raked up Veer Savarkar and alleged that he betrayed leaders like M.K Gandhi, Jawaharlal Nehru and Sardar Patel by signing a letter of apology to the British before independence.

Speaking on the Gujarat model of development, the Union Minister said that BJP works on basis of good governance, development and honesty.

“Gujarat model is the number 1 model and development model. Congress did politics only on basis of divide and rule. They’ve asked for votes on basis of caste, community and religion. BJP works on basis of good governance, development and honesty”, said Thakur.

According to him, PM Modi made Gujarat riot-free and India will progress with Gujarat’s progress.

BJP leader Hardik Patel also hit out at the Congress saying that Rahul Gandhi needs to undertake a “Congress Jodo” exercise instead of the ongoing “Bharat Jodo Yatra”.

When asked about Rahul Gandhi doing a rally in poll-bound Gujrat, Patel said, “Congress should first do Congress Jodo instead of the Bharat Jodo Yatra. The question is whether Rahul Gandhi will come after the elections or before the elections. The people of Gujarat do not want to entertain Congress.”

“I have been in the Congress and I know that the Congress has always insulted the Gujaratis and raised questions on the identity and pride of Gujarat. The people of Gujarat have never accepted Congress and will never do also. There is no comparison or fight between BJP with the Congress. Our motive is to take our model of development further,” he added.

Hardik Patel is fighting the assembly election on a BJP ticket from Gujarat’s Viramgam.