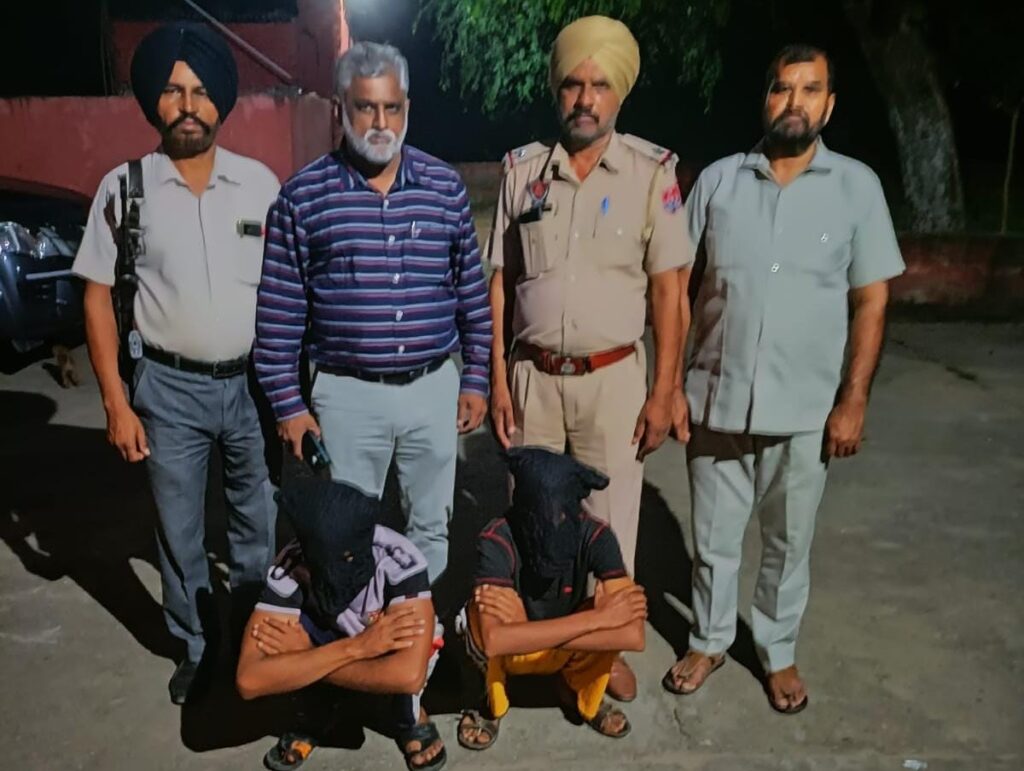 The terror module is being operated by Canada-based terrorist/gangster Arshdeep Singh alias Arsh Dala, who is a close associate of KTF’s Canada-based chief Hardeep Singh Nijjar.

Those arrested have been identified as Veeja Singh alias Gagan alias Gaggu of village Chand Nava in Moga and Ranjodh Singh alias Jyoti of village Ganji Gulab Singh Wala in Moga. The Police have also recovered two illicit weapons including a .22 bore revolver and .32 bore pistol along with 21 live cartridges from their possession.

The development came four days after the Ferozepur Police had recovered one sophisticated AK-47 assault rifle along with two magazines and 60 live cartridges from a pinpointed location at the paddy fields of village Arifke in Ferozepur. Investigations revealed that the consignment was dropped using a drone on the directions of Terrorist/Gangster Arsh Dala, and was intended to be retrieved by Veeja Singh and Ranjodh Singh from Arifke village.

DGP Gaurav Yadav said that after the recovery of the weapons from Ferozepur, an intelligence-led operation was launched across the state to nab the accused persons, and on a reliable inputs, Rupnagar Police have managed to arrest both the accused persons from Chamkaur Sahib area during the intervening night of Saturday and Sunday.

He said that during preliminary investigations, arrested persons have confessed that they had gone to Arifke village to retrieve this consignment on directions of Terrorist/Gangster Arsh Dala but couldn’t find it, and later, it was recovered by the Ferozepur Police on the information of a field owner.

“Both accused have also confessed to having received few drone-based weapon consignments to further deliver them at specific locations as directed by Canada-based Terrorist/Gangster Arsh Dala, which was further to be used for major target killings to disturb communal harmony of the state,” said the DGP.

Senior Superintendent of Police (SSP) Rupnagar Sandeep Garg said that further investigations are on and more arrests are expected soon.

Meanwhile, FIR no 74 dated 2.10.22 has been registered under section 153A of the Indian Penal Code (IPC) and section 25 of the Arms Act at Police Station Chamkaur Sahib.

BOX: PROCESS IS ON TO EXTRADITE GANGSTER ARSH DALA

Canada-based Arsh Dala, a native of Dala village in Moga, is a notorious gangster turned terrorist involved in various criminal activities in Punjab and abroad, and is most wanted by the Punjab Police. His involvement had also emerged in various targeted killings that took place in the Border state of Punjab, besides, in cases of supplying militant hardware including RDX, IEDs, AK-47 and other arms and ammunition to modules in the state after getting them imported from Pakistan.

DGP Gaurav Yadav said that the process is on to extradite Arsh Dala from Canada and soon he will be brought to India. Notably, the Red Corner Notice against Arsh Dala has already been issued in May 2022.