On behalf of the Punjab Government, Local Bodies Minister Dr Inderbir Singh Nijjar today handed over appointment letters to around 150 of these Safai Sewaks/Sewermen at a function held at Guru Nanak Dev Bhawan, here. He said that in the coming days, all appointment letters would be distributed in a phased manner in the city.

It is pertinent to mention that the Bhagwant Mann-led AAP government in Punjab have fulfilled their long pending demand of the Safai Sewaks/Sewermen.

While addressing the gathering, Cabinet Minister, Dr Inderbir Singh Nijjar said that there was an anomaly in the earlier resolution passed by Municipal Corporation Ludhiana (MCL) which was main hurdle in regularising their services. He said that after the Bhagwant Mann-led Punjab Government was formed in the state, the regularisation process was expedited, hence appointment letters have been handed over to the Safai Sewaks/Sewermen. 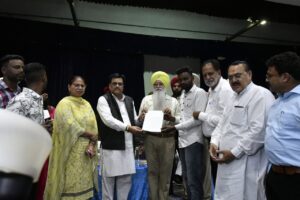 He said that the AAP government stands rock solid with them always and every required step would be taken for their welfare. Hailing the role of Safai Karamcharis during Covid-19, he said that they ensured a clean atmosphere by putting their lives at risk.

The Cabinet Minister announced that the process of regularising services of 456 beldaars/drivers/employees working on DC rate in MC Ludhiana, has also been initiated.

She said that in a bid to set an example and with our duty towards our environment, today’s function was no plastic day.