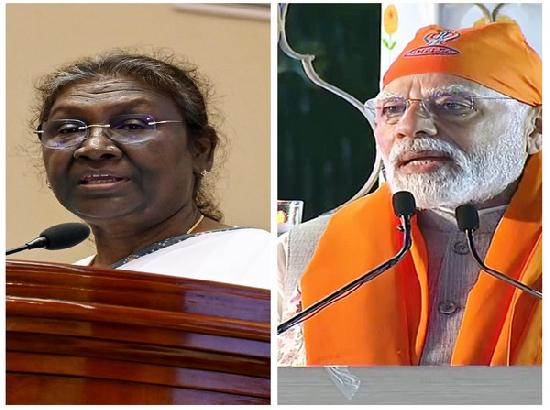 Earlier on Monday, the Prime Minister participated in the 553rd birth anniversary celebration of Sri Guru Nanak Dev ji in the national capital.

President Murmu also extended her heartiest greetings to citizens of the country and Indians settled abroad on the sacred occasion of the birth anniversary of Guru Nanak Dev.

“On the sacred occasion of the birth anniversary of Guru Nanak Dev Ji, I extend my heartiest greetings to all fellow citizens and Indians settled abroad, especially the brothers and sisters of the Sikh community,” the President said in her message.

She further said that everyone should adopt eternal values like truth, sacrifice and moral conduct from the teachings of ‘Japji Sahib’.

“Guru Nanak Dev Ji spread the message of ‘Ek Omkar’ which means that God is one and is present everywhere. He inspired us to practise love, unity and brotherhood. We should adopt eternal values like truth, sacrifice and moral conduct from the teachings of ‘Japji Sahib’. The messages of ‘Kirat Karo’ and ‘Vade Chhako’ inspire us to live with honesty and share the available resources with others. Guru Nanak Dev Ji also gave the message of humility and service of mankind,” she said.

The President said that his teachings will guide us towards peace and prosperity.

“On this auspicious occasion let us adopt his teachings and move forward with the spirit of the well-being of mankind,” she added.

Guru Nanak Jayanti, also known as Gurpurab, is a sacred festival that marks the birth of the first guru of Sikhism – Guru Nanak Dev. The auspicious occasion is observed on the full moon date of Kartik month or Kartik Purnima every year.

The day is also celebrated as Parkash Utsav.

Devoted to the Divine from his childhood, Guru Nanak Dev was a man of peace who spent his entire life emphasizing equality and tolerance. He was born in 1469 at Rai Bhoi di Talwandi village, now known as Nankana Sahib, near Lahore in present-day Pakistan.

Guru Nanak composed many hymns, which were collected in the Adi Granth by Guru Arjan. He visited pilgrimage sites throughout India. The main verses from the Guru Granth Sahib elaborate that the creator of the universe is one.

His verses also propagate selfless service to humanity. Prayers are being held in Gurdwaras on Gurpurab. The different aspects of the celebration go on till night.