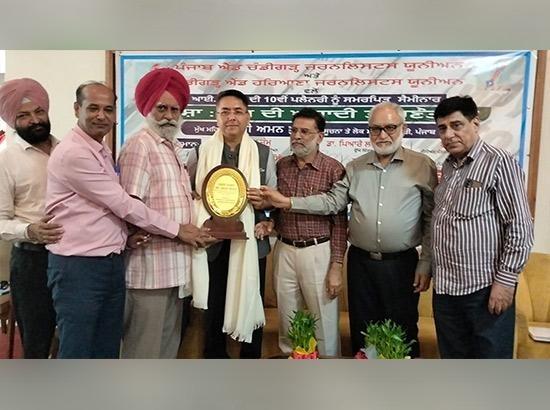 The Chief Guest of the joint initiative organised by Presidents Balbir Jandu and Ram Singh Brar of Punjab and Haryana units of Units respectively was Aman Arora, the Information and Public Relations Minister Punjab. The Secretary General of Indian Journalists Union Balwinder Singh Jammu was the Special Guest.

Speaking on the occasion Cabinet Minister Aman Arora said Media is the fourth pillar and it is also known as mirror of the society. The role of media is very important in the development and progress of the state and nation. He said the department has already initiated the process of re-constituting accreditation committee.

On the demand charter submitted by the Union, the minister said department would be coming up with good news for journalists soon.

The General Secretary of IJU Balwinder Jammu took up the issue of repeal of Working Journalists Act and also talked about the journalists who died during corona period and said journalists were also called corona warriors or frontliners but the bereaved families are still not provided any financial assistance. Besides this, he demanded pension scheme , free bus service scheme for the journalists and also re constitution of accreditation committee.

The senior journalist Hamir Singh talked about how the corporate sector has influenced media sector and judiciary has also come under its affect. In such situation, journalists are working under numerous pressures and threats. The Freedom of Press is narrowing down and journalists are no more employed as regular employees.

news and credibility of factual news is not taken in consideration.

In the beginning of the programme, Pritam Singh Rupal welcomed the guests and dignitaries present on the stage. State Vice President of the Union Jai Singh Chhibber conducted the stage as stage secretary.

At last, State President Balbir Singh Jandu presented vote of thanks and also gave momentos to the dignitaries present on the stage.