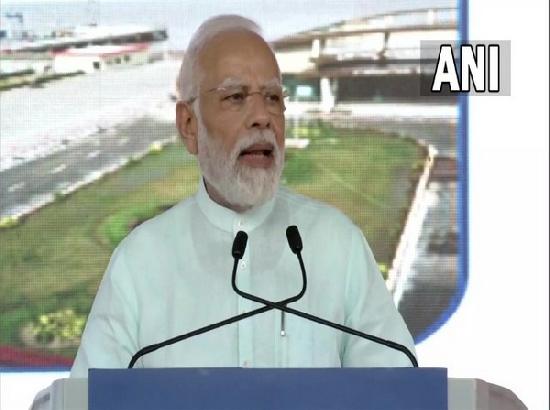 Prime Minister Narendra Modi on Thursday said that with the completion of Diamond Research and Mercantile (DREAM) City, Surat will be developed as one of the safest and most convenient diamond trading hubs in the world.

Addressing after launching developmental projects worth Rs 3,400 crore, PM Modi said, “When the ‘Dream City’ project is completed, Surat is going to develop into one of the safest and most convenient diamond trading hubs in the world. The government has given approval to the power loom mega cluster which will lessen the problems of the power loom workers. It will also solve the pollution problems.” Notably, the DREAM City project has been launched with the vision to meet the growing demand for commercial and residential space for the rapidly growing diamond trading sector in Surat.

Stating that people from across the country live in Surat, the Prime Minister called the city a “mini-India”. “It’s my privilege to lay the foundation stone for infrastructure, sports & spiritual destinations in Gujarat during ongoing celebrations of Navratri… Surat is a great example of ‘Jan Bhagidari’ and unity. People from across India live in Surat, it’s a mini-India,” he said.

“In the last two decades, we built around 80,000 homes for the poor in Surat, uplifting their standard of living. Under the Ayushman Bharat scheme, about 4 crore poor patients got free medical treatment in the country, of which over 32 lakh patients are from Gujarat and 1.25 lakh from Surat,” PM Modi added.

Earlier today, the Prime Minister held a roadshow. A huge crowd gathered to welcome the Prime Minister as his cavalcade moved forward. He will further travel to Bhavnagar to lay the foundation stone and inaugurate multiple developmental initiatives worth over Rs 5,200 crore.

The prime minister will lay the foundation stone for the world’s first CNG terminal and a brownfield port in the city. The port will be developed at a cost of over Rs 4,000 crore and will have state-of-the-art infrastructure for the CNG terminal. The port will have an ultra-modern container terminal, multipurpose terminal, and liquid terminal with direct door-step connectivity to the existing roadway and railway network.

The prime minister will also inaugurate a regional science centre in Bhavnagar, spread over 20 acres and built at a cost of around Rs 100 crore. The centre has several theme-based galleries including the marine aquatic gallery, automobile gallery, and the Nobel Prize gallery. The centre will provide a creative platform for children.