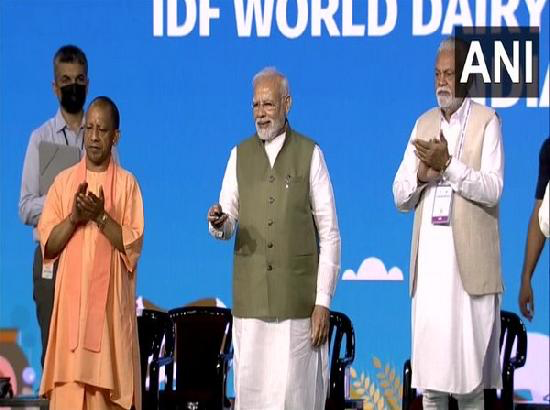 PM Modi also inspected an exhibition at India Expo Centre and Mart. Union Minister Purshottam Rupala, while addressing the World Diary Summit 2022 said that it is organized after 48 years in India.

“World Diary Summit 2022 has been organized after over 48 years in India. Our milk production is 220 million tonnes today. We are in the position to export surplus milk, in line with the ‘Aatma Nirbhar Bharat,” he said.

According to the Prime Minister’s Office, the four-day-long IDF WDS 2022 being held from September 12 to 15, is a congregation of global and Indian dairy stakeholders including industry leaders, experts, farmers and policy planners centring around the theme of ‘Dairy for Nutrition and Livelihood’.

Around 1,500 participants from 50 countries are expected to participate in IDF WDS 2022. The last such Summit was held in India about half a century ago in 1974.

“The Indian dairy industry is unique in the sense that it is based on a cooperative model that empowers small and marginal dairy farmers, especially women. Driven by the vision of the Prime Minister, the government has taken multiple steps for the betterment of the dairy sector resulting in an increase of milk production by more than 44 per cent in the last eight years,” said the PMO.

“The success story of the Indian dairy industry, accounting for about 23 per cent of global milk, producing around 210 million tonnes annually, and empowering more than 8 crore dairy farmers, will be showcased at the IDF WDS 2022,” it said.

The evolution of the dairy sector in India and the stellar role played by dairy cooperatives since the launch of Operation Flood form an integral part of the country’s growth story as the country now is the largest producer of milk.