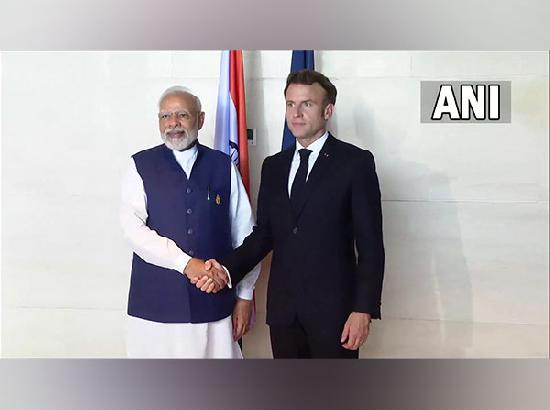 Prime Minister Narendra Modi on Wednesday held bilateral talks with French President Emmanuel Macron in Bali on the sidelines of the G20 Summit.

Besides Macron, PM Modi is also scheduled to meet seven other world leaders today. He is slated to have bilateral agreements with heads of Indonesia, Spain, Singapore, Germany, Italy, Australia and the United Kingdom.

On the second day of his official visit to Bali, PM Modi will participate in the Digital Transformation Session at the 17th edition of the G20 Leaders Summit.

PM Narendra Modi is on a three-day visit to Bali to attend the G20 Leaders Summit.

PM Modi, today, arrived at the mangrove forest. He was greeted upon his arrival by Indonesia’s President Joko Widodo.

Mangroves play an important role in global conservation efforts. India has joined the Mangrove Alliance for Climate (MAC), a joint initiative of Indonesia and UAE under the Indonesian G-20 Presidency.

More than 50 mangrove species are spread over 5000 sq km in India. India is emphasizing the protection and restoration of mangroves, which are rich sites of biodiversity and serve as effective carbon sinks.

Taking to Twitter, PM Modi’s Office said, “PM @narendramodi and other G20 leaders visited a mangrove forest in Bali, giving a strong message of coming together to tackle climate change and boost sustainable development. India has also joined the Mangrove Alliance for Climate.”

During the Mangrove forest visit, PM Modi and US President Joe Biden exchanged greetings with each other.

Yesterday, PM Modi was greeted by Indonesia’s President Joko Widodo at the venue. Upon his arrival in Bali on Sunday night, PM Modi received a traditional welcome.

“Grateful to the Indian community for the warm welcome in Bali!” the Prime Minister tweeted.

On Tuesday, he also addressed the G20 working session on Food and Energy Security where he reiterated India’s long-standing position in favor of dialogue and diplomacy in Ukraine and said “‘We have to find a way to return to the path of the ceasefire” in Kyiv.

He also said, “I have repeatedly said that we have to find a way to return to the path of ceasefire and diplomacy in Ukraine.”

“Over the past century, the Second World War wreaked havoc in the world. After that, the leaders of that time made a serious effort to take the path of peace. Now it’s our turn. The onus of creating a new world order for the post-Covid period lies on our shoulders. The need of the hour is to show concrete and collective resolve to ensure peace, harmony and security in the world,” PM Modi said.

He also addressed the Indian community in Bali where he highlighted the close cultural ties between India and Indonesia.

“India and Indonesia both have many similarities in their cultures. On Sankranti, beautiful and colorful kites fill the skies of both nations,” added PM Modi.