PM Modi has played a pivotal role in getting global respect for the rich Indian culture and heritage: Yogi Adityanath 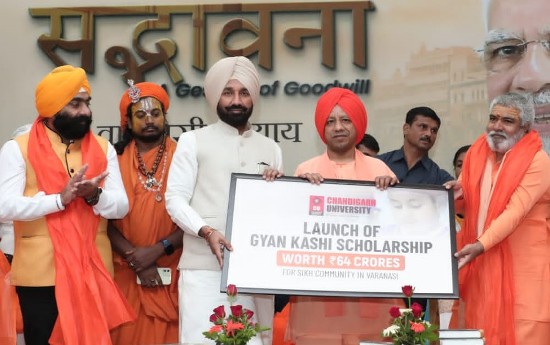 Through various social welfare policies and good governance, Prime Minister Narendra Modi has tried to touch life of 135 crore Indians said Chief Minister Yogi Adityanath. The U.P Chief Minister was speaking during the Sadhbhavana event hosted by the NID Foundation at Varanasi. Sadhbhavana, which means goodwill and communal harmony saw more than 400 spiritual leaders, saints belonging to Sikh and Hindu community, converging together on a platform to endorse the vision of Narendra Modi for unified India. While participating at Sadbhawna, Chief Minister Yogi Adityanath launched two books two books Heartfelt: The legacy of Faith and Modi@20 : Dreams Meet Delivery which are dedicated on the governance model adopted by Prime Minister Narendra Modi. 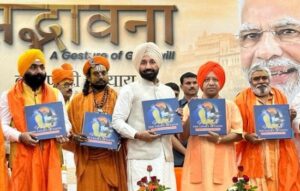 While delivering his address, CM Yogi said, “Although it’s very difficult that any political personality enjoys public trust, popularity for a long time, but PM Modi has lived up-to the expectations of the 135 crore Indians and he has emerged as a leader who converts his thoughts and ideas into action. He delivers what he promises and promises only, what he can deliver”. He further added that, “After coming to power in 2014, PM Modi put to practice his idea of ‘Sabka Saath Sabka Vikas’ through his policies. The Government delivered development, progressive and transparent governance which changed the lives of billions of Indians without discriminating on the basis of caste, religion, region, gender. If we look at the policies such as PM Kissan Yojana, Opening of Jan Dhan accounts, Stand -up India, Start – up India, Toilets for All, health insurance for all, the benefits of all the social welfare schemes has reached to every Indian, irrespective of their caste, gender, region, creed, religion.

CM Yogi emphasized that, “PM Modi has ensured attaining global respect for India’s old traditions, culture and faith. Whether it is opening of Kartarpur Sahib Corridor, 350th birth anniversary celebration of Guru Gobind Singh Ji, announcement of Veer Bal Diwas to pay respect for the martyrdom of Chaar Sahibzadas, delivering justice to 1984 riot victims and restoring the sacred places of Sanatan Dharam in a traditional way”. While highlighting the work done on PM Modi in the field of restoring the heritage and religious sites in varanasi, CM Yogi said, “Maharani Ahilyabi Holkar got the temple of Kashi Vishwanath restored and renovated while Maharaja Ranjit Singh got the gold plating of the Kashi Vishwanath done by donating one ton of gold. It has been possible after 1000 years that through Kashi Vishwanath Corridor PM Modi has made the connection between Baba Vishwanath and Maa Ganga. The redevelopment of Seer Goverdhanpur, which is the birth place of Guru Ravidas Ji has been undertaken. The development of various religious circuits such as Ram Circuit, Krishan Circuit and Buddh Circuit has also been undertaken by PM Modi”.

CM Yogi further added that, “Under the leadership of PM Modi, the construction of grandeur Ram Mandir at Ayodha is currently underway. Whether the restoration and re-construction work of Kedarnath Temple in Uttarakhand is concerned or the recent inauguration of Ujjain Mahakal corridor, PM Modi has played a pivotal role in getting global respect for the rich Indian culture and heritage”. The celebration of World Yoga Day on 21st June is a symbol of getting global recognition of rich Indian culture and tradition.

“PM Modi has always ensured that the benefits of economic prosperity should reach to all the sections of the society. It is because of the vision of PM Modi, that India has today become the fifth largest economy of the world, surpassing Britain; which once used to rule it. I am sure that, with the contribution of every 135 crore Indians, India will soon become the world’s number one economic power” added CM Yogi.

He further said that, “Today, whenever there is any global crisis, the world looks up-to India with hope and trust. PM Modi through the vision of Ek Bharat Shresth Bharat has needled the 135 crore Indians into one India. An India which looks to the world with confidence and zeal to move forward”.

Chief Minister Yogi Adityanath also launched Gyan Kashi Scholarship of NID Foundation worth Rs 64 crores for the Sikh minority students belonging to Varanasi. Under the scholarship, any 10+2 belonging to Sikh community would be eligible to get academic scholarship for higher studies at Chandigarh University based upon their scores in board examination. More than 250 students every year would get benefit under the newly launched Gyan Kashi Scholarship.

While delivering his address to the audience on the occasion, Satnam Singh Sandhu Chief Patron NID Foundation and Chancellor Chandigarh university said that, “It is a matter of great pride that we are today joining together on the platform of Sadhbhavana to realise the vision of PM Narendra Modi of Ek Bharat Shresth Bharat”.

Detailing about the book ‘Heartfelt-The Legacy Of Faith’ by the NID Foundation, Sandhu said that it was an honest attempt at documenting the facts of the history of the Sikh community and the teachings and philosophies of the Sikh Gurus.

“It captures the virtues of Sikhism that are Satt, Santokh, Daya, Nimrata and Pyar, and goes on to show that the values and ethos of the country are not forgotten, rather they are being implemented in our governance model because of their universal and timeless relevance. Taking the five essential virtues of Sikh living as the central theme, the book connects the various initiatives taken by Prime Minister Narendra Modi for the cause and welfare of the Sikhs and the Punjab with the Sikh way of living, thereby highlighting the Prime Minister’s embodiment of upholding truthful values, compassion, humility, contentment, and love for all mankind,” he said.

The book details Prime Minister Narendra Modi’s close association with the Sikhs and Punjab in his early days as politicians, as he rose through the political ranks to become a twice-elected Prime Minister of India, and how his respect for the teachings of the Sikh Gurus and his appreciation and affection for the Sikh community translated into action in the Government taking several landmark decisions for welfare and cause of the community, he added.