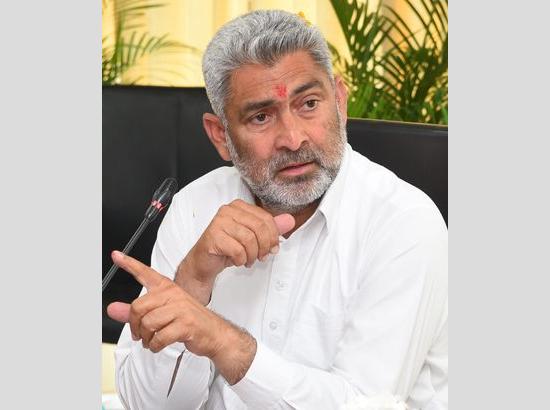 The Punjab Government led by Chief Minister Bhagwant Mann would ensure that every single grain of paddy is procured and no farmer faces any hassle in any mandi during the Kharif Marketing Season (KMS) 2022-23 beginning from October 1 as farmers are the backbone of the predominantly agrarian economy of the State.

Disclosing this here on Friday, the Food, Civil Supplies and Consumer Affairs Minister Lal Chand Kataruchak said that he would commence the procurement process from the Rajpura Mandi on October 1.

Divulging more, the Minister added that during the season, which would continue till November 30, all the agencies would make procurement of Paddy Grade A at the MSP of Rs. 2060 per quintal while common variety would be procured at the MSP of Rs. 2040 per quintal. The State Government has made robust arrangements for the smooth procurement of 191 LMT paddy through Govt of India has fixed the target of procurement target at 184.45 LMT for the State

Principal Secretary Food Supplies, Rahul Bhandari informed that the Punjab Mandi Board has notified 1804 regular mandis during the season, which have been allotted amongst Govt procurement agencies and further 364 temporary purchase centers have also been notified to avoid glut in mandies. He also added that the bardana in requisite quantity has been arranged.

Likewise, grievance redressal committees have also been formed Mandi-wise with control rooms for facilitating the farmers. This would ensure on-the-spot redressal of any issue. The Food, Civil Supplies and Consumer Affairs department has also set up a control room at the Headquarter level to make sure that no farmer encounters any hurdle in selling his produce.

Pointing out further, he said that the RBI has already approved the Cash Credit Limit worth Rs. 36,999 crores to the Punjab Government, while labour and transportation arrangements have been put in place with directions to all concerned to ensure lifting strictly in accordance with the policy.

As per the Punjab Custom Milling policy for Kharif 2022-23 approved by the State Cabinet, E-checking of all rice mills is being done before registration and allotment and as many as 4315 rice mills have been inspected and online allotment of 3500 rice mills has been done.

Notably, the DGP has been requested to set up Nakas at Inter State barriers and deploy police personnel to check illegal recycling of paddy rice from other States in the State of Punjab.

Ghanshyam Thori, Director Food Supplies also informed that on the directions of the Chief Minister, Punjab, the Food, Civil Supplies and Consumer Affairs department has asked the Commissioner Excise and Taxation to deploy mobilise Excise wings to ensure vigilance apart from probing the GST returns of the private players who would procure the paddy.

Apart from this, Flying Squads have been constituted at the Deputy Commissioner level who would keep a hawk’s eye on the paddy arriving into the mandis of their respective districts, added the Director.