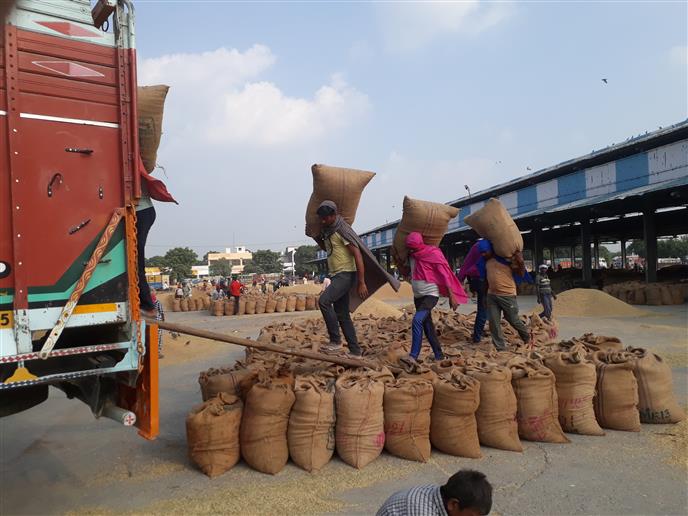 Paddy procurement by government agencies resumed at the grain markets in the district today. The purchase was halted owing to facing technical issues in the issuance of gate passes in a few grain markets.

As per information, around 35,000 MT paddy arrived in grain markets of the district, of which around 5,000 MT was purchased till 5 pm today.

“In the morning, there was an issue in the issuance of gate passes, owing to which farmers faced problems,” said Amar Singh, a farmer.

Procurement had begun in all grain markets of the district, said Ishwar Rana, District Marketing Enforcement Officer (DMEO), Karnal, adding: “We have made arrangements for the purchase of the crop,” he added.

Jagmohan Anand, media coordinator to Chief Minister Manohar Lal Khattar, also visited the Karnal grain market and reviewed the procurement process in the presence of the officials of various agencies.

Deputy Commissioner Anish Yadav said they were expecting to procure 11.5 lakh MT this season, of which around 7 lakh MT was likely to be procured by the Food, Civil Supplies and Consumer Affairs Department. Hafed might procure nearly 2.5 lakh MT, while the warehouse was expected to purchase around 2 lakh MT, the DC added.

The district authorities have also appointed duty magistrates on the Haryana-UP border to check the arrival of only registered farmers on the Meri Fasal, Mera Byora portal.

Meanwhile, farmers protested in Kaithal and blocked the Jind road, demanding to begin procurement. Farmers and arhtiyas alleged that rice millers had been stopped to purchase paddy.

Rice millers purchased paddy at Rs 2,700 per quintal on Friday, after which farmers came in large number with their produce today.

Hoshiyar Singh Gill, farmer leader, said the rice millers were procuring paddy above the MSP and farmers came to know today that rice millers had been stopped to purchase the crop.

Farmers lifted their blockade after the district authorities assured them procurement would begin soon.