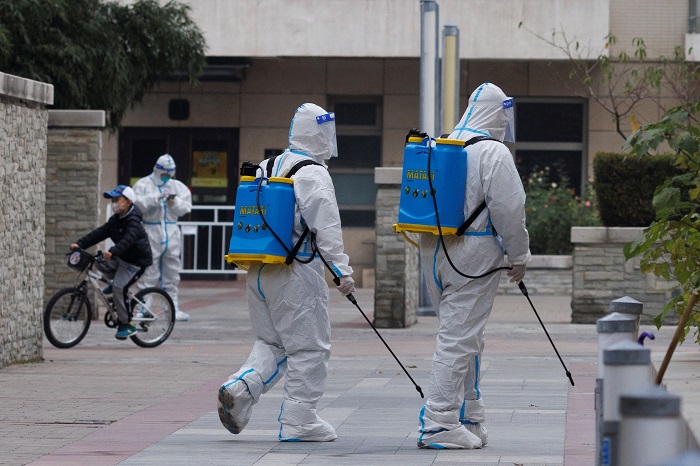 China’s capital Beijing has closed city parks and imposed other restrictions as the country faces a new wave of covid cases.

Elsewhere, more than five million people were under lockdown on Friday in the southern manufacturing hub Guangzhou and the western megacity Chongqing.

The country reported 10,729 new cases on Friday, almost all of them testing positive while showing no symptoms.

With the bulk of Beijing’s 21 million people undergoing near daily testing, another 118 new cases were recorded in the sprawling city.

Many city schools switched to online classes, hospitals restricted services and some shops and restaurants were shuttered, with their staff taken to quarantine.

Videos on social media showed people in some areas protesting or fighting with police and health workers.

Chinese leaders promised on Thursday to respond to public frustration over its severe “zero-covid” strategy that has confined millions to their homes and severely disrupted the economy.

No details were offered other than a promise to release “stranded people” who have been in quarantine or blocked for weeks from leaving cities where there are cases.

People from cities with a single case in the past week are barred from visiting Beijing, while travelers from abroad are required to be quarantined in a hotel for seven to 10 days — if they are able to navigate the timely and opaque process of acquiring a visa.

Business groups say that discourages foreign executives from visiting, which has prompted companies to shift investment plans to other countries.

Visits from US officials and lawmakers charged with maintaining the crucial trading relations amid tensions over tariffs, Taiwan and human rights have come to a virtual standstill.

Speculation on when measures will be eased has centred on whether the government is willing to import or domestically produce more effective vaccines, with the elderly population left particularly vulnerable.

That could come as soon as next spring, when a new slate of officials are due to be named under Xi’s continuing leadership.

Or, restrictions could persist much longer if the government continues to reject the notion of living to learn with a relatively low level of cases that cause far fewer hospitalisations and deaths than when the pandemic was at its height.