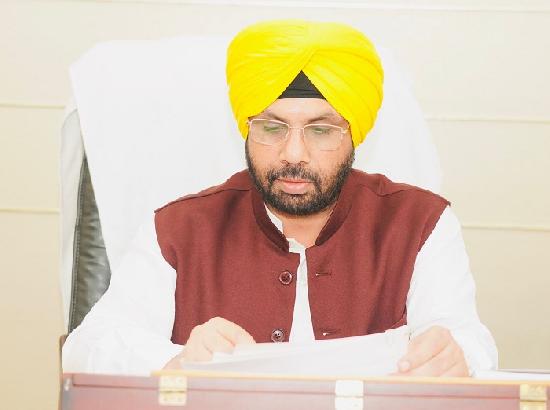 Pertinently, RDSS has been approved by the Punjab Government consisting of Distribution Infrastructure works totaling Rs 25,237 Crores for Punjab state.

The Minister was attending the two-day conference of ‘Power and New Renewable Energy Ministers of States and UTs’ held at Udaipur, Rajasthan on Friday and Saturday.

Power Minister Harbhajan Singh ETO, while addressing the conference, raised the issue of not appointing a Member/Power in Bhakra Beas Management Board (BBMB) from the panel forwarded by Punjab.

“Being the largest shareholder, traditionally all Member/ Power in BBMB were from Punjab, but so far MoP has not appointed any member from the panel forwarded by Punjab,” he said, while requesting immediate withdrawal of the Ministry of Power, Government of India Notification 145 dated 23.02.2022, and to continue with the ongoing convention of appointment of Member Power from Punjab.

He also highlighted issues like Late Payment Surcharge (LPS) Rules 2022, Draft Electricity Amendment Rules 2022 and other rules for consideration by MoP for implementation through consultancy and consensus of the states.

“I request MoP to exempt restrictions on Banking under bilateral category from the New Late payment surcharge Rules 2022 as on 19th August due to default by exporting Discoms, Punjab, which was not a defaulter also suffered as import of power was restricted,” he said.

He further requested MoP to ask Rural Electrification Corporation (REC) and Power Finance Corporation (PFC) to reduce the rate of interest on their existing loans as well as future loans so that the benefit of lower-cost loans may be passed on to the consumers.

The Power Minister apprised the gathering that despite the nationwide coal crises this year, Punjab under the leadership of Chief Minister Bhagwant Mann has met its all-time highest-ever peak demand of 14,311 MW. Notably, record energy demand was met from April to September 2022 which is 13% higher in comparison to the same period of last year.

He said that Punjab has also been able to reduce its Transmission & distribution (T&D) losses to 14.46% (in 2022) and further efforts are being made to reduce the T&D losses to a minimum level.

He added that despite the Chief Minister Bhagwant Mann-led Punjab Government has been providing 600 units bi-montly at free of cost to domestic households, it is paying the subsidy to discom on time and there is no payment default by discom to the generating company.