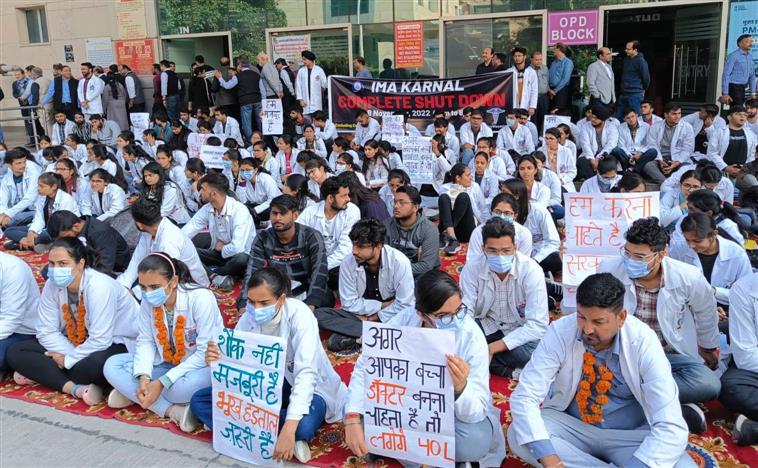 Observing one-day strike, members of the Indian Medical Association (IMA), Karnal unit, kept outpatient departments (OPDs) closed till evening today in protest against the bond policy and also in support of protesting MBBS students, who have been protesting for the past 28 days.

The shutdown of all OPDs throughout the day led to patients running from one hospital to another for medical services. However, emergency services were available.

Of the protesting students, seven have been a fast for the past five days. The health of two students had deteriorated and they were admitted to Kalpana Chawla Government Medical College (KCGMC), where their condition is said to be stable. IMA members, along with MBBS students, handed over a memorandum to the DC in support of students’ demands.

“We kept OPDs closed from 8 am to 8 pm in protest against the bond policy. The government should take the policy back as it is not student-friendly,” said Dr Sanjay Khanna, IMA Karnal unit president.

Dr Rajat Mimani, IMA secretary, said the bond policy was against the medical students as majority of them belonged to poor families and they could not pay the bond amount.

Dr Arvind Bhai said resentment prevailed among doctors, parents of students and students over the policy that would build pressure on future doctors. The government should provide job security, instead of imposing the bond, he demanded.

Panipat: Members of the IMA in Panipat and Sonepat, too, kept the OPD closed on Monday in support of the MBBS students’ protest.

Dr Arora said as many as 150 small and big hospitals and 20 clinics in the district had closed OPDs on Monday in support of the MBBS doctors. Dr Arora and Dr Anand said students had been sitting on a hunger strike at the PGIMS, Rohtak, for many days. They said the government’s bond policy was very harmful for medical education in the state. The government should abolish the bond policy, the IMA members demanded.

In Sonepat, the IMA members closed their OPD services from 8 am to 8 pm and warned the government that if did not roll back the bond policy, they would shut emergency services too. Led by president Dr Paramjeet Singh Dahiya, they gathered in Sector-14 and protested against the state government.