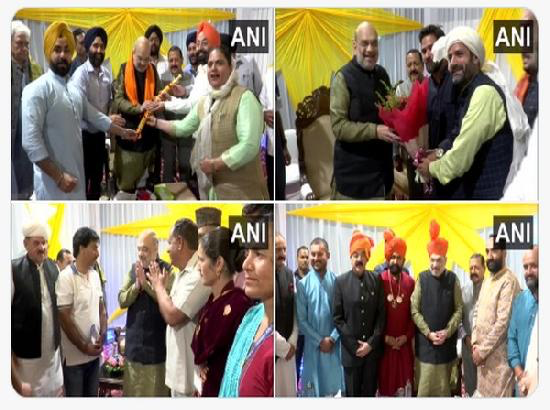 The Home Minister reached the Katra shrine via the Sanjhichatt Helipad. He was accompanied by Jammu and Kashmir Lieutenant Governor Manoj Sinha and Union Minister Jitendra Singh.

Internet services have been temporarily suspended in Jammu and in specific areas of Rajouri.

This is Shah’s first visit to the holy cave shrine after being appointed as the Union Home Minister. His visit coincides with the ninth day of the ongoing Navratri festival.

Shah is scheduled to later address a public meeting at Rajouri, which is around one-and-half hours away from the Vaishno Devi temple.

The Minister will further launch development projects and also lay foundation stones for various projects at Convention Centre in Jammu.Shah will then hold a public meeting in Rajouri and offer prayers at the Raghunath Temple in Jammu.

He will also inspect various developmental projects here before heading to the Kashmir valley.

LG Manoj Sinha, top officials of the Army, paramilitary forces, state police, and civil administration will take part in this high-level meeting expected to begin at 10 am tomorrow.

The Minister will later address a public meeting here at Baramulla around 11.30 am and will address the gathering.Before concluding his visit to the Union Territory, Shah will also launch and lay foundation stones for various development projects in Srinagar around 3.30 pm.

Various programs have been scheduled to take place during his visit to the valley including the ones which will be held by communities like Bakarwal and Gujjars to honour Shah on behalf of the Modi government for working for the welfare of these communities.

In a surprising move, the Modi government recently nominated Ghulam Ali to the Rajya Sabha. Ali joined BJP in 2008 and hails from the Gujjar tribe.

Several organizational meetings are on the cards too including the state core group meeting and meeting with party MPs and MLAs.This is the second visit by Amit Shah to Jammu and Kashmir since the abrogation of Article 370 by the Modi government in August 2019.