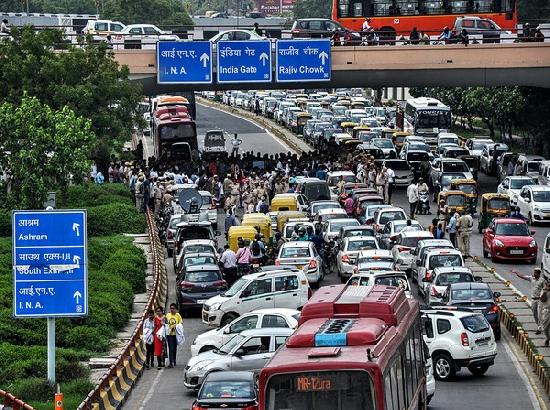 In view of the 90th Annual General Assembly of Interpol to be held in the national capital next week, the traffic movement on several roads in Delhi will be regulated between October 18-21, said an official.

The 90th Annual General Assembly of Interpol between October, 18-21 at Pragati Maidan, New Delhi. Delegations from 195 countries will be attending the event. Prime Minister Narendra Modi will be inaugurating the Assembly on October 18 while Union Home Minister Amit Shah will be addressing the valedictory function on October 21.

A top Delhi Traffic Police Official said that the arrangements for the stay of delegates have been made hotels namely The Lalit, The Imperial, Shangri La, Le Meridien, The Oberoi, Hyatt Regency and The Ashok.

It is important to reduce the traffic volume on roads in New Delhi District and this can be achieved with support from corporations, organizations and individuals. Non-essential staff members can be directed to work from home, employees can be advised to use public transport and working hours can be staggered.

Commuters traveling in the vicinity of New Delhi district could encounter possible delays and may wish to consider alternative routes, he said.

Meanwhile, the security agencies and Delhi police are on high alert in the national capital.

A senior official informed that recently a meeting was held to discuss security and possible threats during the four-day long event in which 195 countries are likely to participate and the ongoing festive season.

“The meeting was attended by senior officials of the Intelligence Bureau (IB), Research and Analysis Wing (RAW), Delhi Police and other concerned agencies. In the meeting, security was hotels where delegations will stay, travel route and security measures at the venue where the meeting will be held was discussed in details,” he said.

More than 4,000 Delhi police personnel from security units and others from Crime Branch, local police stations, para-military and reserve police personnel have been deployed for the security of the event scheduled to be held at Pragati Maidan in New Delhi between October 18-21. A control room has been set up for monitoring of CCTVs.

Security of hotels like The Lalit, Shangri-la, Hyatt Regency, The Imperial and other five-stars in New Delhi and South West Delhi areas have been taken over by Delhi Police.

“We have deployed Delhi Police personnel in and around hotels where delegations will stay during the event. Cops in plain clothes have also been deployed to keep watch on any suspicious movement or any unverified person at the locations,” he said.

The security of hotels and the venue has been taken over by the police from Saturday onwards.A composite security system has been set up in and around Pragati Maidan and the JLN stadium event.

The General Assembly is Interpol’s supreme governing body, comprising representatives from each of the 195 member countries which meets annually.

Each member country may be represented by one or several delegates who are typically ministers, chiefs of police, heads of their Interpol National Central Bureaus and senior ministry officials.