“Indian Rupee has performed much better…,” FM Sitharaman on Rs vs USD 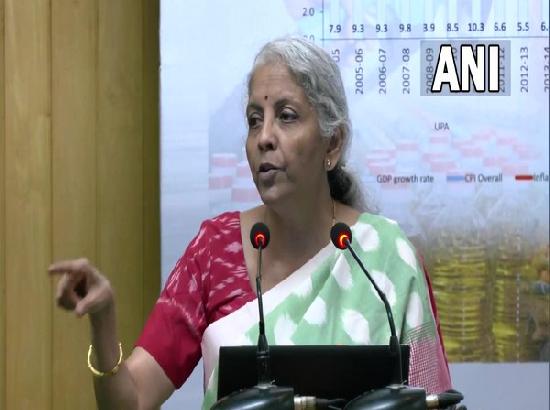 Union Minister for Finance & Corporate Affairs Nirmala Sitharaman on Saturday (local time) said that Indian Rupee has performed much better than many other emerging market currencies in reference to the value of Rs dropping against the USD as geo-political tensions continue to rise.

Speaking at a media briefing on her official US visit, she explained that it was not the Rs weakening rather USD was strengthening. Responding to ANI on measures being taken to tackle the slide, she said, “First of all, I will look at it, not Rupee sliding and look at it as USD strengthening incessantly. So, obviously, all other currencies are performing against the strengthening of the USD. It is a matter of fact that Indian Rupee has probably stood this USD rates going up, exchange rate in favour of the USD. The Indian rupee has performed much better than many other emerging market currencies. The efforts of RBI are more towards seeing that there is not too much volatility, it is not to intervene in the market to fix the value of the Rupee. Containing the volatility is the only exercise RBI is involved in and I have said this before that Rs will find its own level.”

Talking about inflation, she said, “Fundamentals on macroeconomics are good and foreign exchange reserve is good. We are in a comfortable situation and that is why I keep repeating inflation is at a manageable level too. We’re making efforts to bring it further down.”

Talking about cryptocurrency, she highlighted the technologically driven regulatory framework for G20 members.

“We want to bring up matters related to cryptocurrency on the table of G20 so members can discuss it and arrive at a framework or SOP so globally, countries can have a technologically driven regulatory framework,” said FM Nirmala Sitharaman.

She also raised her concern over the global spillover of their political and economic decisions, she said, “I did say this inside the meetings and there were several others, incidentally all from South countries.”

She also raised the issue of the energy crisis amid the Russia-Ukraine war and said that many countries have had to go back to coal for energy production as gas cannot be afforded or is not available.

“The western world has seen countries moving to coal, Austria has already said the same. In the UK, one of the oldest legacy thermal units is back again. It’s not just India, many countries have had to go back to coal for energy production as gas cannot be afforded or is not available,” said FM Sitharaman.

Speaking about India’s G20 Presidency, she highlighted the country’s increased use of digital applications and said that it will be showcased to member countries. “There are suggestions by many members that during G20 we should showcase what we’ve done in our digital achievements like the way Aadhar or other digital applications have spread in the country, she said.

Even during her meeting with the World Bank President David Malpass himself said that India should showcase how common people have accepted the deepening of digital applications in India.
Sitharaman further stated that Malpass would be happy to work together with India to take it to other parts of the world.

“Finance Minister Smt. @nsitharaman thanked @DavidMalpassWBG for a productive Development Committee meeting and support to India over the last two years especially in increasing the Single Borrower Limit,” tweeted the Ministry of Finance.

The Finance Minister mentioned that World Bank has been a valuable partner of the G20 since its inception and India looks forward to closing collaboration with the World Bank during the upcoming G20Presidency.

Meanwhile, impressed by the quick and deep penetration of the Government of India’s financial inclusion and digitalisation initiatives among the poor, Malpass assured Sitharaman of showcasing this to other FMs as a way for governments to help their poor leapfrog in these challenging times.

FM Sitharaman also mentioned that during its Presidency, India would like the G20 to explore the potential for MDBs to enhance climate financing through leveraging and intermediating resources.

She also met Mohamed Al Hussaini, UAE’s Minister of State for Financial Affairs, on the sidelines of the IMF-WB Annual Meetings 2022.