Indian economy to grow at 7 % in 2022-23 despite global headwinds: Sitharaman 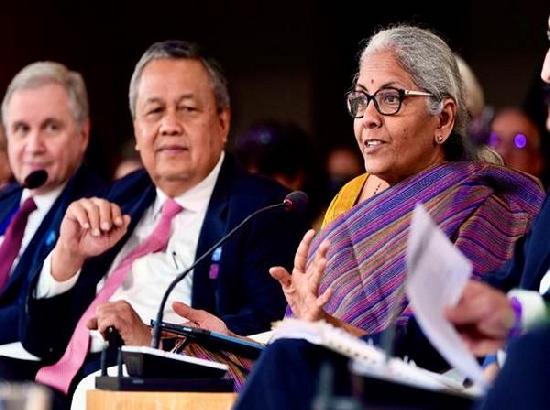 The Indian economy is projected to grow at 7 percent in the current financial year despite global headwinds, Union Finance Minister Nirmala Sitharaman has said.

The Finance Minister emphasised the initiatives the Indian Government has taken to protect growth while pursuing inflation management.

“We have ensured the availability of free food grains to more than 800 million vulnerable families for the past 25 months, through the country’s massive public distribution network,” she said.

Sitharaman said last-mile delivery of financial services to the poor has been a key priority of the government and this has been aided by India’s digital public good infrastructure.

Today, the Finance Minister added, India is leading the world in terms of digital payments innovations with our transaction cost being the lowest in the world, according to an official statement released by the Union Ministry of Finance.

“I believe the IMF needs to increase resources available for emerging and low-income countries to safeguard the global financial system. Therefore, concluding the 16th GRQ by December 15th, 2023 is vital for increasing the voting rights of emerging market economies (EMES) in line with their relative positions in the world economy,” Sitharaman said.

The Finance Minister stated that a key downside risk to global recovery is the exacerbated debt distress in many low-income countries. It is, therefore, important that the Fund provides them necessary support to deal with balance of payments-related vulnerabilities.

On climate change, the Finance Minister emphasised the importance of the multilateral approach with the principles of equity; and common but differentiated responsibilities and respective capabilities.

Sitharaman emphasised that India has set out an ambitious climate action path through our updated Nationally Determined Contributions which demonstrate India’s commitment at the highest level for decoupling of economic growth from greenhouse gas emissions.

The Finance Minister underlined that the transfer of climate finance and low-cost climate technologies from developed to developing countries has assumed critical significance.

Sitharaman noted that the IMFC meeting is being held at a juncture when the global economic outlook is clouded by key downside risks-growth slowdown in major economies, cross-border effects due to the ongoing geopolitical situation, inflationary pressures led by escalating food and energy prices that have adversely impacted vulnerable economies.