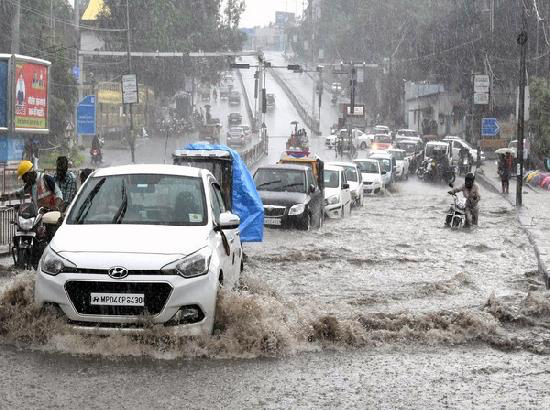 The India Meteorological Department (IMD) issued a yellow alert for heavy rainfall over the next two days in 10 districts in Himachal Pradesh on Saturday.

The IMD has issued a heavy rain warning for the districts of Bilaspur, Hamirpur, Shimla, Kangra, Mandi, and Kullu.

The IMD has issued an alert in the state for heavy rain and flash floods in most parts of the state.

Deputy director of IMD Himachal Pradesh, Bui Lal said that during the past 24 hours most parts of the state received heavy rainfall and this will continue in the region.

He said that Nagrota Suriyan in Kangra received 97.8 mm and Una received 50.9 mm and Palampur received 50.4 mm of rain during the past 24 hours. He said that so far the monsoon rains are 7 percent less in the state.

As heavy rainfall continues to hit parts of Himachal Pradesh, the tourists and local citizens of the state continue to face difficulties and bear damage to public properties.

The death toll due to rain-triggered landslides and other weather-related incidents rose to 22 in the state.

Meanwhile, heavy rains triggered flash floods in Khanyara village of Dharamshala on Friday. The flash floods affected the normal life in the area. Several houses and shops were destroyed. Senior officials visited the village to assess the situation.

“Debris and destruction witnessed in wake of flash flood in Ghurlu Nullah in Khanyara village of Dharamshala. Heavy rains triggered a flash flood here. Shops and electricity transformers were swept away. The loss is still being estimated. But we are sure it is high,” a local told ANI. (ANI)