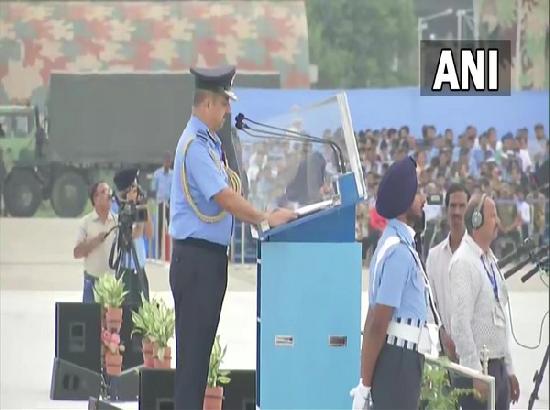 Asserting that the combat potential of the Indian Air Force has to be sustained through the induction of modern fighter jets, Air Chief Marshal VR Chaudhari on Saturday said his force has initiated steps to ensure that the squadron strength remains at the desired levels.

The statement by the IAF comes at a time when the force has gone down to 30 squadrons instead of the 42 squadrons sanctioned by the government for it to be able to combat China and Pakistan simultaneously.

“Our fighting potential has to be sustained over the years through the induction of 4.5 Gen fighters, AWACS, AEW&C, and Flight refueling aircraft. We have initiated necessary steps to ensure our fighter squadron strength remains at the desired level,” he said in his address at the IAF Day here.

The Indian Air Force is now awaiting clearance from the government to issue a tender for buying 4-5 generation 114 fighter jets which would be equal to or more capable than even the Rafale fighter jets which have been inducted in the last two to three years.

He said the IAF has signed a contract for 83 LCA Mk 1A and is fully committed to the development of LCA Mk-II and the fifth-generation Advanced Medium Combat Aircraft (AMCA).

The IAF chief said to enhance the force’s capabilities, the indigenous development of six Airborne Early Warning and Control aircraft Mark-II has been sanctioned and we are actively pursuing the acquisition of, UAVs, Counter unmanned aerial systems technology and strengthening our networks.

“Modern armed forces have to be sufficiently self-reliant to ensure minimum disruptions. Towards this, Atmanirbharta and Make in India is a step in the right direction,” he said.

“To effectively handle the full spectrum, artificial intelligence is being used for quicker decision-making and analysis of big data. I am happy to report that several projects are well underway to utilize the potential of automation, data analytics, and artificial intelligence to transform our operational philosophy,” he said.

Focusing on jointness among three services and modern warfare, he said that the traditional domains of land, sea, and air have expanded to include space and cyber.

“We are increasingly seeing the convergence of all these domains into one continuum in the form of Hybrid Warfare. The use of non-kinetic and non-lethal warfare to supplement kinetic means has changed the way wars will be prosecuted.

He said conventional systems and weapons will need to be augmented by modern, flexible, and adaptive technology.

He said “We need to accept the fact that tomorrow’s conflicts cannot be fought with yesterday’s mindset. To be able to execute all missions in an environment of denial will increasingly be the basis of our training in the Air Force.