Hunger, diseases rife in Pakistan as flood-victims forced to live under sky 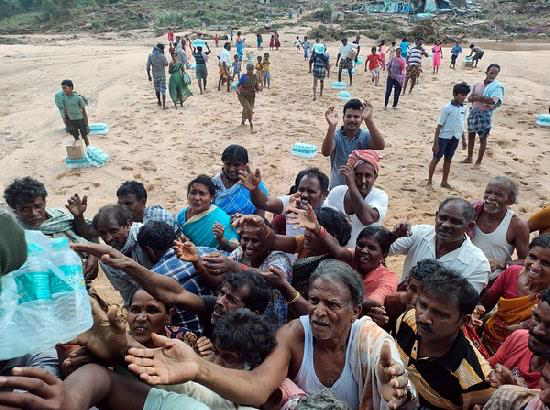 Record monsoon and heavy floods in Pakistan has given rise to hunger and various illnesses which have affected 660,120 people since July and the experts believe that the situation would aggravate in the coming days as the flood affectees are forced to live under the sky depriving the required resources.

According to Dawn, the Secretary general of Pakistan Medical Association-Karachi, Abdul Ghafoor Shoro said, “One of the major challenges currently being faced in the disaster areas is lack of shelter. Today, we visited Mirpurkhan, Tando Muhammad Khan and Tando Adam, but couldn’t see a single government-run relief camp and people were forced to live under the sky.”

“People living under the open sky are forced to drink contaminated water. They are getting little bit of food either from non-profit organisations or some kind-hearted landlords.”

“Skin infections are common as the vast majority of people had remained exposed to water for 10 to 15 days. The flooded areas are now breeding grounds for mosquitos but the people neither have shelter nor mosquito nets,” he added.

The situation would aggravate in the coming days and there was an immediate need for urgent action, he added.According to the latest July-September health department data, skin ailments and diarrhoeal diseases are rampant in flood-affected areas.

A total of 149,551 people have been reported with diarrheal diseases while 142,739 people reported skin infections.

The cases of diarrhoea and dysentery are increasing in Sindh, the Dawn reported.

The official statistics recorded 132,485 cases of acute respiratory disease, 49,420 cases of suspected malaria, 101 cases of snakebite and 550 cases of a dog bite. There were 185,274 cases of other illnesses.

According to officials, over 15,000 cases of skin infection cases, around 14,000 cases of diarrhoeal diseases and more than 13,000 cases of acute respiratory illnesses are being reported daily at government-run medical camps.

However, workers engaged in relief efforts in the flood-hit districts believed that the actual number of cases was much higher as there were still several places in the province where the government was yet to reach and start relief operations, the Dawn reported.

According to health department officials, around 5m people have been displaced in the devastating floods, which damaged over 1,000 health facilities in Sindh.

Of them, 966 were partially damaged, whereas 126 were completely destroyed.

Sindh Health Minister Azra Pechuho on Sunday shared statistics of women affected by the flood which stated that over 47,000 pregnant women were in shelter camps in the province.

“Hundreds and thousands of people had contracted various diseases after the floods,” she said.

The UN agency had also warned that many women and girls were at an increased risk of gender-based violence (GBV) as almost one million houses were damaged in the floods that spelled suffering for millions across Pakistan.