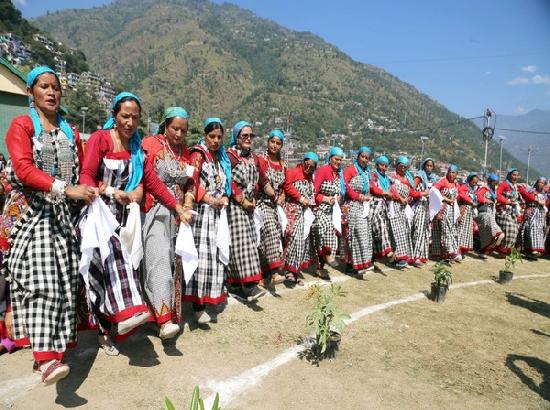 Around 8,000 women, attired in traditional outfits, took part in the International Kullu Dussehra Festival and performed folk dance, at Rath Maidan in Kullu on Friday.

The Prime Minister walked to the main attraction of the weeklong festival with thousands of other devotees and paid his obeisance to Bhagwan Raghunath.

He extended a warm welcome to everyone with folded hands and observed the magnificent Rath Yatra as well as the majestic assembly of the deities during the historic Kullu Dussehra celebrations.

The fest is being celebrated with full fervor in the picturesque town. Decked in traditional attire, women performed folk dances while men played the drums.

Dussehra is widely known as Vijayadashami in the Southern part of India. It is that time of year when the well-known Ramlila is performed, gorgeous fairs are held, crowds swarm to see Ravan effigies burst into flames, and the aroma of traditional sweets fills the air.

Dusshera falls on the tenth day of Sharada Navratri, however, even though celebrations and cultural practices vary according to the location in India’s culturally rich country, the festival’s fabric that binds everyone together remains.

Dussehra also known as Dasara symbolizes the triumph of good over evil, and it is tied to two stories. After a fierce battle that lasted more than nine days, it is said that Maa Durga conquered Mahishasura on this day.

According to another tale, Dussehra is observed to commemorate Lord Rama’s victory over Lanka’s ten-headed evil king, Ravana.

The tenth day of Navratri, which is comprised of nine days dedicated to honoring each form of Goddess Durga, is Dussehra. Vijayadashami, on the other hand, is the day of victory.

While some connect it to the famous Ramayana conflict, others do it to remember Goddess Durga’s triumph over the demonic Mahishasura.

In some regions of the country, Dussehra also known as Vijayadashami or Dasain makes way for the Diwali celebrations.