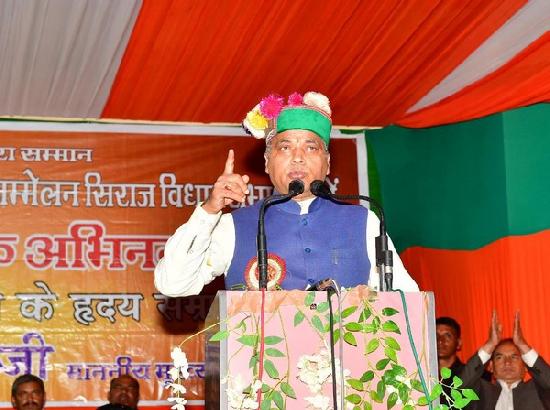 Himachal Pradesh Chief Minister Jairam Thakur on Sunday, while highlighting the government’s “cordial relations” with its employees, said that it has resolved most of their issues despite the pandemic, including full salary during COVID.

The Chief Minister that despite the COVID-19 crisis, the state government has ensured full salary, pension, and other benefits to the employees so that they do not face any inconvenience.

He said that the period of regularization of contract employees was reduced from three years to two years and one-year relaxation to regularize the daily wagers.

Thakur said that the opposition leaders were misleading the employees of the state in the name of the Old Pension Scheme (OPS).

He asked the Congress leaders why their Chief Ministers have not implemented OPS in their ruling states even after 10 months of their announcements.

The Chief Minister said that issues of computer teachers, issues of outsourcing employees, etc would be considered “sympathetically”.

“The state government has recently decided to constitute ‘Himachal Pradesh Kaushal Vikas and Rozgar Nigam Company’ which would ensure deployment of skilled, semi-skilled, and other manpower in government departments, boards, corporations, and universities, etc. This would provide much-needed relief to the employees,” he said.

“On the auspicious occasion of Independence Day this year, the state government had announced to release of the first installment of arrears of revised pay scale to the employees and pensioners with effect from January 1, 2016. Arrears of the revised pay scale will be given to lakhs of employees of Himachal Pradesh in September this year, which would benefit about 2.25 lakh employees and 1.90 lakh pensioners of the state,” Thakur added.

“In the year 2017, the daily wagers were getting Rs 210, which has been increased to Rs 350 by the present state government,” he said.

The Chief Minister also released a folk song composed and sung by local folk singer Ramesh Bhardwaj on the occasion.