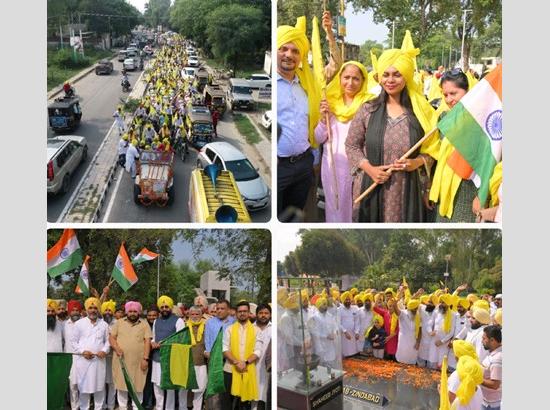 The Rally took off from Saragarhi Gurudwara to Samadhis of Martyrs at Hussainiwala passing through Udham Singh Chowk, Multani gate in Ferozepur. The participants were seen in tying Basanti turbans and with Basanti Duppatas and the slogan of “Inquilab Zindabad” were sky echoed. The members of Shaheed Bhagat Singh, Rajguru, Sukhdev memorial, Anganwari Workers, Members of NGOs, woman, children and youth took part in large numbers in this rally.

Speaking about the Rally, Fauja Singh Sarari, said that the main objective of this massive Rally is to pay tribute to the Martyrs and to inspire the youth to build the nation of his dreams and to connect them with their roots.

Deputy Commissioner Ferozepur said that on this auspicious occasion district administration has planned various events throughout the day to inspire people with the ideals of our martyrs and to make their vision a reality in the process of building this nation.

She said, the kind of sacrifice Shaheed Bhagat Singh made for this country can never be forgotten and his name will always be embedded in the hearts of all Indians.

On this Occasion, MLA Urban Ranveer Singh Bhullar called upon the people to guard the thoughts of the martyrs and to take the vow to follow their thought process and he congratulated the people of this country on the birth anniversary of Shaheed-e-Azam Bhagat Singh.

Sagar Setia IAS, ADC (G) informed that the day is filled with a number of events starting with the Rally.