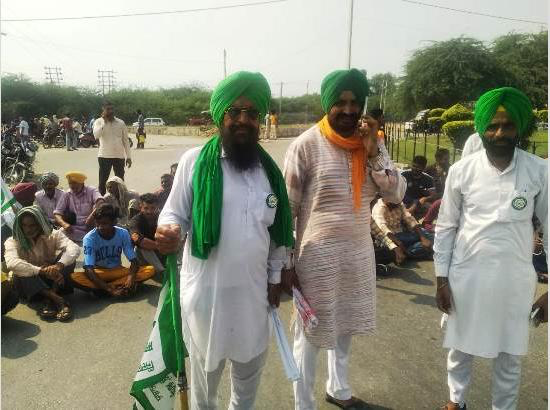 Bharti Kisan Union Ekta (Sidhpur) have decided to sit on dharna to register their protest over the issue of notices to the farmers of border districts of Punjab, for eviction of land, said Gursewak Singh Dhaliwal, Block Mamdot President.

The Canal department has issued 15-days notices to farmers of Ferozepur border district of villages AliKe, Habib Ke, Kesar Singh, Rajo Ke Gatti, Chandiwala, Tendi Wala and Dulchi Ke and the farmers of 35 border villages are under stress on being affected for cultivating land over 37,000 acres for the last more than 60 years failing the case will be filed against them under PP Act.

The farmers under the banner of BKU Ekta Sidhpur have decided to sit on permanent dharna to register their protest from September 30 at the main chowk of Ferozepur Cantt.

The farmer leaders – District President Gurmit Singh Ghorechak and Block Mamdot President Gursewak Singh Dhaliwal said, we will not vacate the lands at any cost and support the famers.

It is pertinent to mention that thousands acres of area belong eighter to Centre government or the Canal department. About seven decades back, these lands were given to the farmers for cultivation by the Centre and state governments.  The farmers working hard on the undeveloped land made it productive land and now dependent on its income for their livelihood.  Some of its land is also of Sutlej River but with the passage of time, the water level was reduced and farmers started cultivating on this land also.

In 1976, the government passed an Act, to sell the land at the low prices on certain condition like – the farmer having at least 7 years ‘girdawri’ in his name can submit the file, he should deposit revenue of Rs.500 and Rs.3500 per acre of 7 years, general category person should give Rs.15,000 per acre and SC quota person should give Rs.12,000 per acre.  But the majority of the farmers being economically weaker could not purchase this land and later on this scheme was closed.  Not only this, the ‘girdawris’ in the name of farmers were also cancelled.

The farmer leaders have also submitted a detailed memorandum to the Chief Minister, Punjab and decided to sit on dharna permanently demanding to restore ‘intkal’ policy of 2007.