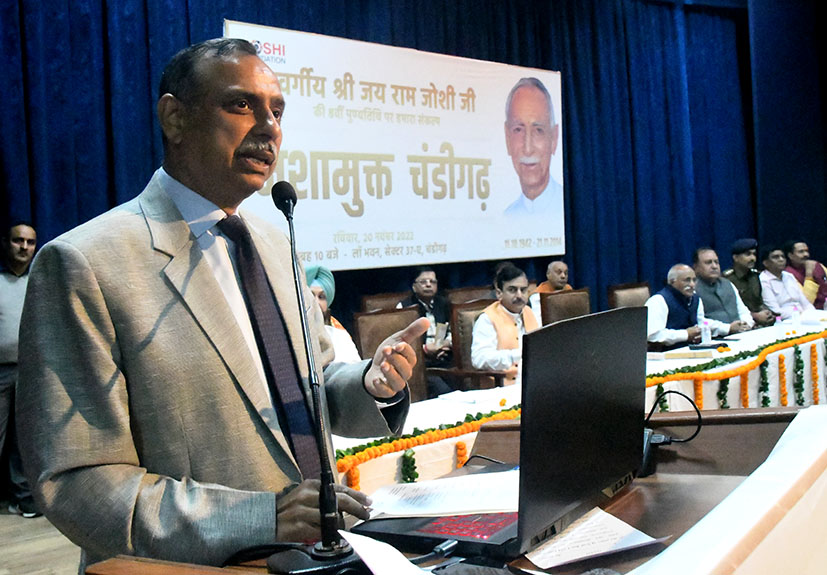 The Chandigarh police, along with the city-based non-governmental organization (NGO) ‘Joshi Foundation’ launched an anti-drug campaign ‘Drug-Free Chandigarh’ in the city on Sunday, to spread awareness among the people, especially youth living in colonies, to stop the consumption of drugs.

Residents of various colonies of Chandigarh, including women and children, gathered at Law Bhawan on Sunday afternoon where Director General of Police (DGP) of Chandigarh, Praveer Ranjan, launched Joshi Foundation’s ‘Drug-Free Chandigarh’ campaign. Law Bhawan was jam-packed with the colony residents even sitting on the floor.

While addressing the public, DGP Ranjan said, “The present generation will have to take an oath of not consuming any type of drug, to save the society in the future. Most of the people, who get involved in criminal activities like murders and thefts, are drug addicts. PM Narendra Modi -led central government has started an initiative to make India a drug-free nation by 2047, and for this, the people must act as responsible citizens and should help in eradicating drugs from the society”.

“To fight against drugs, people must reach out to police every time they find a drug addict, a drug smuggler, or a drug purchaser, so that police can take necessary action against them. People can call on Chandigarh police’s helpline number—112, to fight the drug menace and to make the city a ‘drug-free’ zone”, DGP added.

The event was organized by Joshi Foundation to mark the 8th death anniversary of its founder Jai Ram Joshi, who was Chandigarh’s former State president of the BJP and National Council member.

Vineet Joshi, chairman of, Joshi Foundation, said, “The drug menace can be eradicated from society only with the collective efforts of family, society, and government. The family of the drug addict is the first person who should act wisely whereas the family is the one, who can raise their children with good values so that they do not get involved in such activities”.

“In association with the Chandigarh police, we will conduct two awareness campaigns, every month, and in a year, we aim to cover all the 22 colonies of the city”, said Saurabh Joshi, president, of Joshi Foundation and councilor.

During the event, a quiz was conducted, especially for the children, to spread awareness on how to identify people who take drugs, why they consume drugs, and what health complications are faced by the addicts.

Besides, an oath was taken by the people gathered at the event, including children, that they will never consume drugs and help in eradicating the menace.