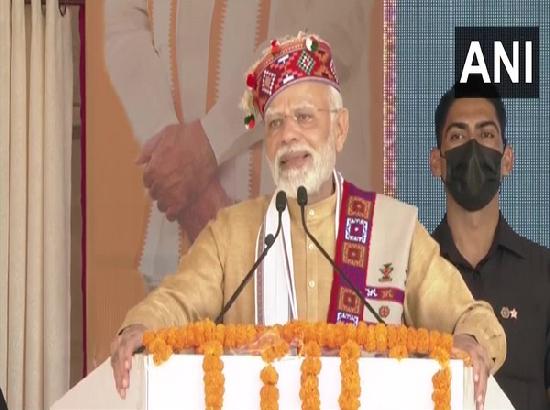 Prime Minister Narendra Modi, who launched several projects related to pharma, education and connectivity in Una, said on Thursday that the festival of Diwali has arrived early for Himachal Pradesh.

Addressing a public rally here, PM Modi said, “The festival of Diwali has arrived early for Una and Himachal Pradesh. I am happy to announce gifts worth rupees several thousand crores to Himachal before Dhanteras and Diwali. Today I flagged off the inaugural run of the new Vande Bharat train. This is the fourth Vande Bharat train to be introduced in the country.” Attacking the Congress, he said, “I remember the condition of Himachal. No development was there. The earlier governments in Himachal and those sitting in Delhi also remained indifferent in fulfilling the needs of you people. They could never understand your hopes and aspirations.”

Prime Minister said it is the BJP government that is working towards the aspiration of the people and building new infrastructure.
PM Modi, who laid the foundation of Bulk Drug Park here today said the pharma park will attract investment of around Rs 2,000 crore. “Medicines will become cheaper when both, raw materials and production, will be made in Himachal Pradesh,” he said.

He said the BJP government not just fulfilling the needs of the people of the 20th century, but is also bringing the modern facilities of the 21st century to every door in Himachal.

“Development of rural roadways, availability of water supply and healthcare facilities along with progress in digital infrastructure has always been the top priority of the government. New India is overcoming the challenges of the past and growing rapidly,” he said.
Highlighting the development of rural infrastructure, PM Modi said that rural roads are being constructed in Himachal at double the speed, while connectivity to Gram Panchayats is also being provided at a rapid pace.

With an aim to give further impetus to the pharmaceutical sector, PM Modi on Thursday laid the foundation stone of Bulk Drug Park in Una, Himachal Pradesh.

According to the Prime Minister’s Office (PMO), the Drug Park will be built at a cost of over Rs 1,900 crore. The Park will help reduce dependence on active pharmaceutical ingredient (API) imports.
It is expected to attract investment of around Rs 10,000 crores and provide employment to more than 20,000 people. It will also give a fillip to economic activities in the region, said the PMO statement.
PM Modi also launched the Indian Institute of Information Technology (IIIT) Una. Its foundation stone was laid by the Prime Minister in 2017.
Earlier today, PM Modi flagged off Vande Bharat Express from Una railway station during his visit to the mountain state.

According to Prime Minister’s Office (PMO), running from Amb Andaura to New Delhi, it is the fourth Vande Bharat train that has been introduced in the country and is an advanced version compared to the earlier ones, being much lighter and capable of reaching higher speed in shorter duration.

It accelerates to 100 km per hour in just 52 seconds. The introduction of the train will help boost tourism in the region and provide a comfortable and faster mode of travel.