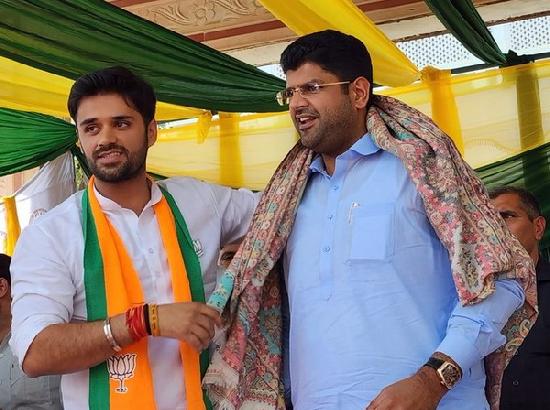 “Congratulations to our alliance’s candidate Bhavya Bishnoi on winning! This victory is the seal of the people on the pro-bono publico works of our government. Hearty thanks to the people of Adampur,” Dushyant Chautala tweeted in Hindi.

Bharatiya Janata Party (BJP) candidate Bhavya Bishnoi has won the Adampur seat in Haryana on Sunday.Bishnoi is the son of BJP leader Kuldeep Bishnoi who had vacated the seat after resigning from Congress to join the BJP in August.

“It is a victory of the policies of Prime Minister Narendra Modi, of the working of Chief Minister Manohar Lal Khattar, of the trust of Adampur in Chaudhary Bhajan Lal family,” father of Bhavya Bishnoi said.

He further expressed gratitude to the Adampur people for trusting them. “I thank the people of Adampur as they trusted us once again,” he added.

Meanwhile, Chief Minister Manohar Lal Khattar has thanked the people for the “grand victory” of the BJP in Adampur.

“I express my gratitude to the people for providing a ‘grand’ victory by blooming lotus in Adampur,” CM Manohar Lal Khattar tweeted in Hindi

Haryana’s Adampur seat–which is considered a stronghold of Bishnoi– had witnessed the contest between BJP, Congress, Indian National Lok Dal, and the Aam Aadmi Party (AAP).

Bhavya Bishnoi won the Adampur assembly seat with as many as 67,376 votes, while the Congress-fielded Jai Prakash received 51,662 votes.

Amid tight security arrangements, the counting of the votes for Adampur seat in Haryana began around 8 am on Sunday morning.

This poll was necessitated after the younger son of former Haryana chief minister Bhajan Lal– Kuldeep Bishnoi, who is also the father of Bhavya Bishnoi– resigned from the post and decided to switch sides from Congress to BJP in August this year.

Earlier in the day, Bhavya Bishnoi had said that the polls were about the “victory margin”. He also exuded confidence that Adampur would be celebrating Diwali soon.

“This poll was not about winning or losing, but about the victory margin.

With the blessings I’ve received from my Adampur family since the beginning, I am confident that people will once again celebrate Diwali within a few hours,” Bhavya Bishnoi had said.