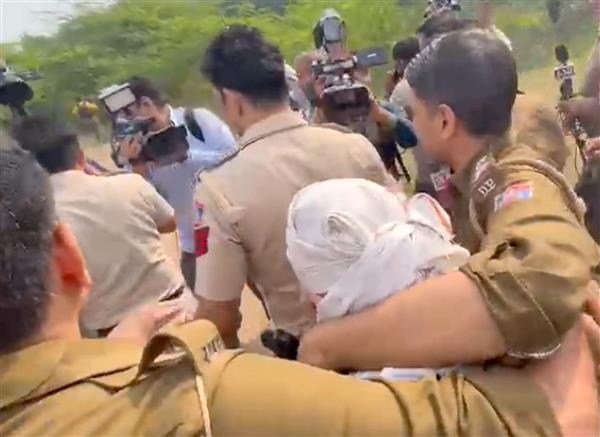 The Delhi Police on Tuesday took Aaftab Amin Poonawala, the 28-year-old accused of killing his live-in partner, to the forest area of south Delhi’s Chhatarpur and spent nearly three hours to locate specific places where he had allegedly dumped her body parts.

Poonawala allegedly strangled his live-in partner Shraddha Walkar in May and sawed her body into 35 pieces which he kept in a 300-litre fridge for almost three weeks at his residence in South Delhi’s Mehrauli before dumping them across the city over several days.

After the scene recreation exercise on Tuesday, the accused was brought back to the police station.

According to police officials, he will also be taken to some other places in the city besides the Chhatarpur jungle area as part of their probe into the horrific murder.

As Poonawala, with his face covered with a white cloth and surrounded by police personnel, was taken to the woods, camera crews and journalists jostled with each other.

The ire over the gruesome killing seemed to spill over with a woman at the spot asking Poonawala if he was ashamed of his actions.

“The crime scene was recreated to understand and ascertain the sequence of events that led to the heinous crime and how he managed to locate the spots where different pieces could be dumped without inviting public glare,” a senior police official said.

The police is also likely to approach authorities at online dating app Bumble through which both the accused and victim met.

“We want to access his account to analyse his profile and know how many women he was in contact with and screen the chats to understand his psyche. Based on the profile analysis we will also be approaching those people with whom he was in contact with and invited them to the same residence where he had killed the woman,” the official further said.

Police officials are also trying to get in touch with the accused’s friends and will probe whether he was in relationship with multiple women after killing Walkar or he was cheating on her when they were together.

“We will approach some of his friends whom he met before being in relationship with the woman,” the official said, adding, his social media account is also being analysed to get details about their common friends.

Details of the killing and its grisly aftermath came to light during his interrogation last week following which Poonawala, a resident of Vasai in West Mumbai, was arrested in the early hours of Saturday.

Poonawala had told the police during investigation that he killed his live-in partner after a quarrel over marriage and the idea of chopping her body into 35 pieces was inspired by “Dexter”, an American crime TV series.

He bought the fridge to preserve the body parts and used to step out past midnight to dispose them of. The accused meticulously planned which ones to dispose of first depending upon which part starts decomposing at the earliest, the police said.

According to police officials, 13 body parts were found after the accused pinpointed the areas where he had thrown them, but only after their forensic examination, it can be confirmed if they belong to the victim.

They are yet to find the murder weapon.

After meeting through the online dating app, Poonawala and Walkar later started working for the same call centre in Mumbai and fell in love. But their families objected to the relationship as they belong to different faiths, prompting the couple to move to Mehrauli earlier this year.

“Around mid-May, the couple had an argument over marriage, which escalated and Poonawala killed her,” Ankit Chauhan, Additional DCP-I, South district, had said.

“The accused then cut her body into over 35 pieces. He bought a 300-litre fridge to preserve the body parts and stocked up on incense sticks and room fresheners. He disposed of the pieces in different parts of the city over several days. He used to step out past midnight to dump the severed body parts,” he added.

Chauhan said the woman was not on talking terms with her family due to their differences over her relationship with Poonawala.

The complaint by the victim’s father alleged that Poonawala used to beat Walkar on several occasions and that she had informed her family about it earlier.

After receiving the complaint, the Mumbai Police traced her last location to Delhi and also called Poonawala whose contradictory statements raised suspicion, prompting them to rope in Delhi Police.

On November 8, Mumbai Police reported at Mehrauli police station regarding the missing woman. During the investigation, a raid was conducted at Poonawala’s residence and he was detained.

Poonawala has been remanded in five-day police custody.