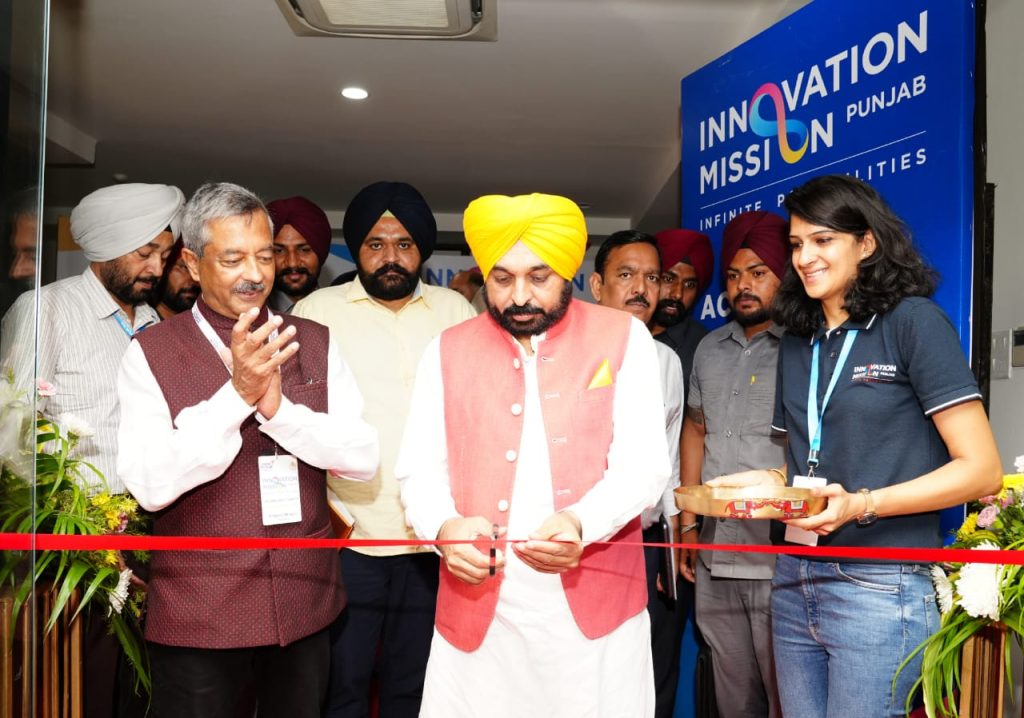 “My target is to ensure that the youth are not branded as ‘aimless’ but they are transformed into a formidable asset for the state,” said the Chief Minister while inaugurating the (Innovation Mission) IMPunjab’s Accelerator here at Kalkat Bhavan.

The Chief Minister said that the youth of the state are full of new and innovative ideas which can be very helpful for the growth and prosperity of Punjab. He said that these ideas need to be utilised in a positive direction so that Punjab can emerge as a front-running state in the country. Bhagwant Mann said that his government will leave no stone unturned for ensuring that youth of the state gets the required platform and support from the Punjab government.

The Chief Minister asserted that Punjabis are blessed with the qualities of entrepreneurship and leadership. He said that due to these qualities the Punjabis have carved a niche for themselves across the globe. Bhagwant Mann emphasised that Punjabi entrepreneurs have made huge empires from humble ideas and have proved their mettle in every arena.

The Chief Minister further asserted that within India too major start-ups have founded by Punjabi entrepreneurs. He said that the state government is duty-bound to provide the right support to our youth to help them build their startups. Bhagwant Mann envisioned that world-class facilities like IM Punjab Accelerator will help to create jobs, bring investments, ensure economic development and bring positive social change in the state.

The Chief Minister asserted that ever since assuming the charge of office his government has been making strenuous efforts to provide corruption-free administration in the state. He said that for the first time a single window system for various departments has emerged as a real-time single window to facilitate prospective investors. Bhagwant Mann revealed that prior to this these windows were den of corruption but now they have been transformed into actual facilitation centers for the industrialists.

Citing an example, the Chief Minister said that as runways at the airports facilitate an Airplane for its smooth take-off in the same manner the state government will help the youth to realize their dreams. He asserted that every effort will be made to give wings to the ideas of youth and no stone will be left unturned for it. Bhagwant Mann made a fervent appeal to youth to make all-out efforts for carving an identity of their own to make a place in society.

The Chief Minister bemoaned that due to the apathetic attitude of the successive governments the country has lagged behind in progress and prosperity. He said that it is ironical that our youth have to go for medical education in those countries that had attained freedom merely 25 years ago. Bhagwant Mann said that the time has come when this situation is reversed by creating excellent infrastructure in education and health, for which his government is making efforts.

The Chief Minister also asked the youth to become job givers instead of job seekers. He said that Innovation Mission Punjab is a unique private-public partnership that aims to build, empower and act as a catalyst for startup communities especially the youth in Punjab. Bhagwant Mann said that apart from opening new vistas of employment and prosperity for youth it will help in making Punjab among the top state for startup hubs in India.

Earlier, Investment Promotion Minister Anmol Gagan Mann said that the state has for the first time got a youthful Chief Minister who is full of ideas to ensure progress of state and prosperity of people. She also highlighted the initiatives being taken by the state government for putting it on an orbit of high growth trajectory.

On the occasion Chairman Punjab, Pramod Bhasin said that the mission with its networks, both physical and virtual accelerators, is bringing world-class mentors and global investors to provide all the support startups need to scale. He said that they have already started supporting the startups in the state.