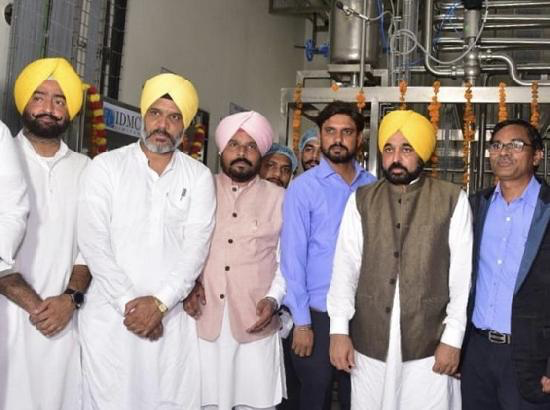 Punjab Chief Minister Bhagwant Mann today said that the state government will give a major push to the agriculture allied activities for supplementing income of the farmers.

The Chief Minister, while addressing the gathering after dedicating Verka milk plant with capacity of processing one lakh litre milk, said that it is the need of hour to bail out farmer from crisis.

He said that due to increasing agriculture inputs and diminishing returns the agriculture is no longer a profitable venture. Bhagwant Mann in such scenario the allied activities can bail out the farmers.

The Chief Minister said that it will reduce the dependence of farmers only on fields. He said that this project constructed at cost of Rs 15 crore will give major push to diary farming sector.

Bhagwant Mann said that besides giving impetus to dairy farming it will also help in checking the supply of spurious milk in state.

The Chief Minister further said that another such plant with capacity six times more than this plant is coming up at a cost of Rs 100 crore in Ludhiana.

He said that it will be too dedicated to people soon. Bhagwant Mann said that stringent quality check is also being introduced in these plants.

The Chief Ministed asserted that upgradation of the procurement infrastructure is the need of hour to ensure best quality of milk is collected from villages and then is supplied to consumers after processing.

Bhagwant Mann envisioned that Milkfed will usher brand Verka to new horizons, where sole mantra shall be inclusive growth of all. Bhagwant Mann unequivocally said that the sole aim of his government is to extend maximum support and best prices to the dairy farmers of Punjab by following the true essence of cooperation.

The Chief Minister also asserted that farmer friendly schemes should be implemented so as to boost the dairying business amongst the youth so as to make them financially independent and self reliant.

Bhagwant Mann also said that the Verka products like ghee, milk, curd, kheer and others have huge potential across the globe.

He said that supply of Verka in Delhi is 30,000 litres which will be enhanced to 2 lakh litres very soon. The Chief Minister said that in democracy people are supreme and they have the ultimate power in democracy.

He said that the people have ousted those leaders who have not performed for the state and given a chance to them to serve the state.

Bhagwant Mann said that instead of working for the well being of people the rejected leaders of state are finding faults in every pro-people initiative of the state government.