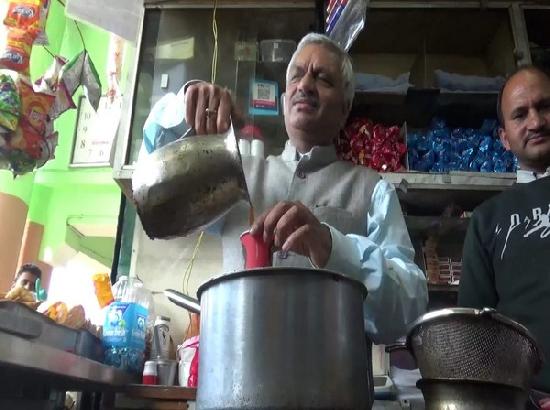 Suresh Bhardwaj will now contest the Assembly polls from Kasumpti after the party’s candidate Sanjay Sood, who runs a tea shop in Shimla got the election ticket to contest from Shimla Urban. Speaking to the ANI, Sanjay Sood said, “I am extremely grateful that BJP made me its candidate to contest from a hot seat like Shimla Urban, I am on seventh heaven as it is truly a big honour for a small worker like me. I would say that it was my very good decision to work for BJP.”

He further elucidated his background saying that he belonged to a very poor family and has been running this tea shop since 1991. “Prior to this tea shop, I used to sell newspapers at a bus stand. Despite being from a poor family, the sense of service remained in the heart ever since,” he said.

His education and culture study came from the Rashtriya Swayamsevak Sangh (RSS). He said that he could manage to afford college by selling newspapers and that was the time when he got the opportunity to work in the “Vidyarthi Parishad” (student council). “I worked in student council for five years but had to stop that because of financial issues I could not work for it any further. Then I later worked as a Medical Representative for 2 years, after which I founded this tea shop in 1991 and this is my workplace since then. I feed my family and carry their expenses from this shop,” he said mentioning his activeness in politics despite coming from a non-political background.

“I do not come from a political background but have a very high spirit for service, and that was the reason why I sat at the booth for Balakram Kashyap of Janata Party in 1977, while I was in school. And since the formation of BJP in 1980 I have been working for it,” he said.
Further in the conversation, Sood mentioned that he was the party’s General Secretary of Shimla Mandal Urban before becoming the vice president of Shimla Division after which he was made the media in-charge of the district.

“While doing so (role of media in-charge), the party gave me a ticket and I became the councilor of Shimla Municipal Corporation twice. Then I became the president of Shimla district,” he added.
“Today I feel proud that the party has declared me its candidate from Shimla. I will not be able to pay off my party,” he added further.

On being asked that if there was any resentment among party workers on his candidacy, he replied, “I have a simple point that anyone who is with Lotus flower cannot be angry. It hurts only momentarily. It is natural to be disappointed if you don’t get what you want. I will meet all of them. I have full faith that eventually we all will work for lotus and win the seat for Shimla constituency.”

Reacting to this surprising change, BJP minister Suresh Bhardwaj said, “In Himachal Pradesh, it is not customary to change one seat and fight in another seat. Surely it is strange because here is only one seat where I have been elected regularly for 32 consecutive years of politics.”

Bhardwaj has been working for BJP since 1980 and was also in Janata Party before that. Kasumpti is also not far away from Shimla, and nor is it untouched, he added.

He further said, “Kasumpti is a mixed region and it would have been better if this shuffle could have taken place with prior information that someone like me would have to contest from here, especially when there is not much time available.”

Terming the decision “paramount”, he said that even if you have to do a little shifting in any place, then there is bound to be some regret, but since it is the decision of the party, it is paramount.