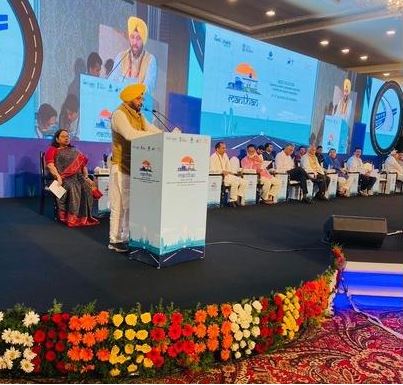 The PWD Minister pointed out that development and maintenance of road networks was a constant process for which increased and adequate funds should be released time to time for completion of projects in stipulated deadlines. Punjab is making continuous and concerted efforts to meet the needs related to funds, said the Minister, adding that almost all the other states accept the fact that adequate funds are never available to fulfill needs of the road sector. He also emphasized that a special scheme for this purpose should be introduced.

While speaking at a national conference on completion of 75 years of independence at Bengaluru under ‘Azadi Ka Amrit Mahotsav’ on September 8 & 9, Harbhajan Singh E.T.O. stated that road infrastructure and network plays a pivotal role in a country’s holistic development. He pointed out that better road infrastructure was the backbone of industrial as well as growth in other sectors too. Describing that Punjab had to pass through a tough time after the independence in developing the State road network and village roads by its own resources. Now, with schemes such as PMGSY, Punjab is further committed towards improving Link roads.

Elaborating that presently in Punjab, Harbhajan Singh ETO said that there were 1300 km Greenfield Expressways and Access Controlled National Highways under progress. These new major developments would connect states with ports besides encouraging activities to make the existing road infrastructure more robust, he added. Handing over possession of land for greenfield projects is being expedited. The works on ground have also been started where the possession of land has been handed over.

The PWD Minister said that the State had availed funding through various means including PPP and OMT etc to upgrade the road network, besides seeking funds from other concerned institutions. Similarly, performance-based long-term maintenance agreements have been entered into for proper maintenance of the state’s road network. He said that the development of roads in Punjab is highly impacted due to its geo-strategic position. Development of new links and bridges in border districts requires approvals from defence authorities regarding location, specifications, and construction schedule. He said that the development of a better road network in the border areas would help in meeting the needs of the residents for agriculture in the lands vis-a-vis strengthening the defence of our country. He also suggested to install CCTV systems on Highways/roads for improved Security and safety of road users.

ETO said that the density of metalled roads increased rapidly from 12.65 km/100 sq km to 283 km/100 sq km in 2021 due to the continuous efforts of the state governments after the reorganization in 1966. He said that Punjab is among the top states in terms of road density. He said that so far the state had a network of 4086 km National Highways (including expressways), 8076 km State Plan Road network and 64878 km village/link roads with different lane configurations. He said that the Public Works Department reviews the activities and the achievement of targets regarding the construction of roads in Punjab.

He said that link roads developed in Punjab has made a great contribution in making the country’s food reserve and ensuring food security He said that Punjab has adapted new technologies according to the requirements of the work conditions, mechanized road construction and currently we have such a road network, which is one of the best road networks in the country.

ETO also thanked the Union Minister Nitin Gadkari for inviting the National Conference and said that the discussions held in this conference paved the way for increasing mutual cooperation and coordination between the Centre and the States and also for the development of an integrated road network. There will be a response to development which will play an important role in the overall development of our society and nation. He said that such mutual churning and multilateral discussions will prove meaningful for the states, because by exchanging each other’s experiences and learning’s, the states will be able to work more actively for the development of the country.

During this conference, public works ministers of the states of India, senior officials, technical experts, and industry leaders were present.