CAQM reviews implementation of directions to restrict stubble-burning in Punjab 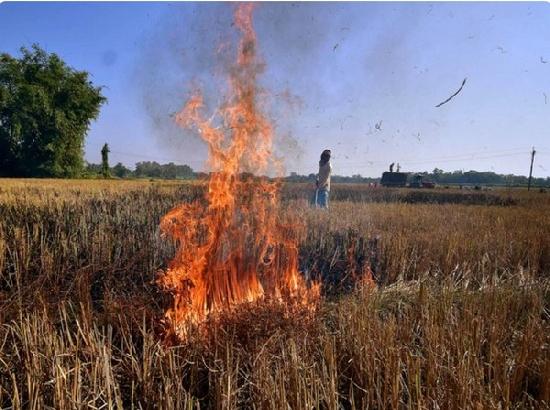 Reviewing the status of implementation of measures directed to restrict stubble burning in Punjab, the Commission for Air Quality Management in NCR and Adjoining Areas (CAQM) held a meeting with the Chief Secretary and Deputy Commissioners of 22 districts of Punjab except Pathankot (no farm fire incidents reported).

The primary focus of the review meeting was to assess the on-ground implementation of directions and reiterate the need for immediate intensification of actions to put a halt to the sudden spike in stubble-burning cases seen in the last few days in Punjab. The Chief Secretary and Deputy Commissioners of the 22 districts of Punjab were reminded of their earlier commitments of drastically bringing the farm fire counts in 2022 as compared to last year.

The Deputy Commissioners of 10 districts namely Amritsar, Barnala, Bhatinda, Firozpur, Jalandhar, Kapurthala, Ludhiana, Sangrur, Tarn Taran and Patiala where more than 1,000 fire counts are reported, were specifically advised to pay special attention and focus on the implementation of the action plan.

During the review meeting, the Chief Secretary and Deputy Commissioners of the 22 districts of Punjab assured that they will put their best foot forward to substantially bring down the rising farm fire incidents in Punjab.

They also assured that a decline in stubble-burning incidents is expected to be seen in the coming days.

Stubble burning continued unabated in Punjab with the state reporting nearly 24,000 such cases so far, an official said on Friday.

The incidents of stubble burning have seen a rise in parts of Punjab this year in comparison to last year. However, the area of fields burnt has witnessed a drop of 1 per cent so far.

Speaking to ANI over the phone, Senior Environmental Engineer of Punjab Pollution Control Board, Gurbakhshish Singh Gill said that 1,144 incidents of stubble burning have taken place in the state till Thursday and 24,146 such incidents in Punjab.

“We are working in coordination with the government. Efforts are on. Farmers are being sensitised. Our teams are monitoring the situation. We are hopeful of the situation being in our control this time,” he said earlier on Thursday.

He attributed various factors to the deterioration in the Air Quality Index (AQI).

“There are various factors responsible for the deteriorating AQI. Stubble burning is one of them, other is Diwali, transportation and other atmospheric conditions,” he said.

Speaking to ANI on Thursday, Deputy Commissioner of Bathinda, Showkat Ahmad Parray said, “Nearly 1,200 incidents have been reported till now. Last year, it was nearly 900 which has increased this time. But the data that comes to us is not right in itself because there is some period during which the satellite does not capture the incidents. So if there is stubble burning taking place during that period, such incidents are not reported to us,” he said.

Pollution has risen in Delhi where the AQI remained in the ‘severe’ category for the second consecutive day. Stubble burning has contributed to 34 per cent of Delhi’s PM 2.5 pollution.