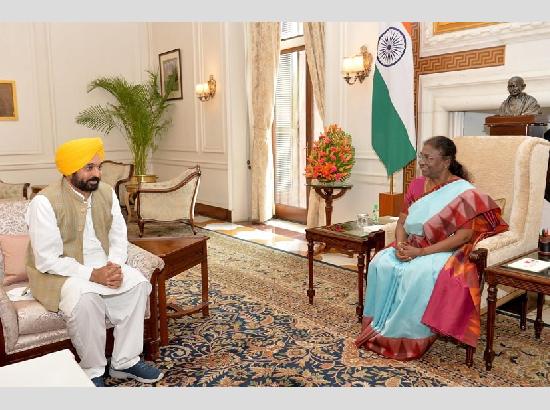 The Chief Minister called on the President at Rashtrapati Bhavan this morning and invited her to visit PUNJAB-the land of great Gurus, saints, seers and prophets.

The Chief Minister apprised Murmu that Punjab is the cradle of civilisation and inherits a rich culture that can be observed only by visiting this pious soul.

He said that the President of India must visit the state and have a feel of this glorious cultural heritage besides enjoying the warm hospitality of the Punjabis.

Bhagwant Mann said that entire Punjab will give a red carpet welcome to country’s President during her visit to the state.

Later, interacting with mediapersons the Chief Minister said that his tour to Germany will give a major impetus to the economic activity in the state.

Bhagwant Mann said that during his visit to Berlin, Munich and Frankfurt, he will be meeting leading companies in the field of manufacturing, tourism, pharmaceuticals and others who are keen to invest in Punjab.

He said that the entire effort is aimed to make sure that Punjab emerges as the most preferred investment destination in the country and across the globe.

The Chief Minister reiterated his commitment to emerging state as an industrial hub adding that the state government is leaving no stone unturned for it.

Bhagwant Mann said that strenuous efforts are being made to propel the industrial growth of state on one hand and open new vistas of employment for youth on the other.

He said that Punjab has a conducive environment for industrial growth due to which investors are keen on coming in the state and expand their business.