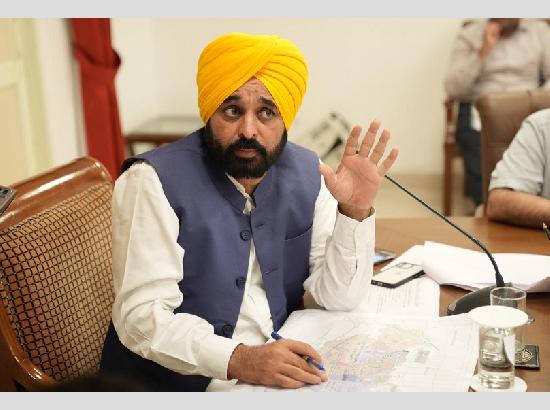 The Chief Minister asked the industry department to invite Comments of the Industrial Fraternity by uploading the policy on the website www.pbindustries.gov.in.

He said that suggestions regarding the policy can be sent by email at suggestions.ind@punjab.gov.in and can also be submitted on the portal itself.

Bhagwant Mann said that the policy has been meticulously drafted for giving a major push to industrial development on one hand and providing employment to youth on the other.

The Chief Minister said that policy aims at Promoting Punjab as the preferred Investment Destination by accelerating industrial growth and job creation.

Likewise, he said that it will accelerate the growth of Startups and promote entrepreneurship by nurturing innovation, improving competitiveness and enhancing capability.

Bhagwant Mann said that policy will also accelerate growth of MSMEs and develop world-class infrastructure for the industry including quality and affordable power.

The Chief Minister said that policy will also facilitate the availability of skilled manpower to the Industry, create opportunities for moving up the Global Value Chain and bring synergy between State programs and Central schemes to achieve Global scale.

He said that it will also help to have a Circular and sustainable economy, attract Rs. 5 lakh Crore of investment in five years, increase the Share of the Secondary sector in GSDP to 30% and Tertiary sector to 62% and increase the employability of the youth through skilling and increase employment opportunities in the State.

Bhagwant Mann said that policy will also facilitate the development of at least 15 Industrial Parks in the State, attract at least one anchor unit in various Manufacturing and Service Industry Sectors, provide power at affordable and fixed tariff for 5 years to the Industry and upgrade power supply infrastructure to all the industrial areas to provide quality and uninterrupted power.

The Chief Minister said that draft policy also envisages to carryout in depth study of 10 clusters every year for specific interventions to increase their competitiveness, to upgrade and set up common facility centres in five clusters every year, to upgrade and set up 10 Technology centres in the State, to facilitate 1000 start-ups in five years and to facilitate setting up of 10 incubation centres/ accelerators in the State particularly focusing on Digital manufacturing, Lifesciences (Biotechnology), Agro &Food Processing and Information Technology.

He said that it will also help to build strong linkages with all the major educational institutions, to facilitate setting up of 50 Entrepreneurship Development Centres in colleges, to set up one Skill University in the State, to set up one Skill centre for each identified industrial cluster and to set up advance skilling centre on hi-tech manufacturing, design and IT skills for five identified sectors.

Bhagwant Mann said that to facilitate investors the draft policy proposes to scale up Invest Punjab Business First portal for a single unified interface to the Industry and Businesses for all regulatory and fiscal services throughout their lifecycle and its Integration with National Single Window System, to re-engineer the processes of seven core departments on priority namely Industry, Power, Pollution Control, Labour, Housing & Urban Development, Local Department and Taxation to make them extremely simple, industry friendly and completely digital and to rationalise document/checklist of various regulatory services at all levels of processing.

The Chief Minister also said that the draft policy also stipulates to restructure existing entities and empower them through statutory powers to translate the vision and mission into reality, to set up a Policy Implementation Unit to support the implementation of various aspects of the policy and monitor the progress, to set up effective mechanism for talent acquisition for specialized projects, organizations and other initiatives and to set up effective mechanism for partnering with various national and international agencies and develop effective PPP model for infrastructure, technology support, skills and other requirements of the Industry.

He said that while formulating Draft Policy stake Holder consultations were held with prominent Industrial houses both at state and district level. Bhagwant Mann said that the draft Policy has Provision for Fiscal and Non-Fiscal Incentives for new as well as existing units across all category of units like MSME, Large, Anchor, Border Districts, Border Zone, Thrust sectors, Private Industrial Parks and Sick Units. The Chief Minister said that Policy has Ten Core Focus areas including Infrastructure, Power, Skill, StartUps, MSMEs, Ease of Doing Business , Fiscal/Non-Fiscal Incentives, Export Promotion, Logistic, Grievance Redressal and Stakeholder consultations to strengthen the ease of doing Business ecosystem in the state to provide facilitation and support to industry in an efficient and Transparent way.

Meanwhile, Principal Secretary Industries and Commerce Dalip Kumar informed that Final Industrial and Business Development Policy 2022 will take into account the suggestions of Industry who can submit them at the earliest.

He said that as the new policy has to be notified by October 17, 2022 so the industrialists should to send suggestions within a fortnight.